Matt Lauria is a strong actor both literally and figuratively.

He’s played soldiers in Parenthood and Friday Night Lights. Now, he’s starring in a new series, Kingdom, where he shows off his six pack while portraying an MMA fighter.

However, the actor also shows his sensitive side as Ryan on Parenthood, and tonight we will reach for the tissues as he tells Amber he will support her in their unplanned pregnancy.

When asked how he can explain how Ryan and Amber conceived in a hospital bed, he told Zap2it, “I don’t think I should be the one to explain, physiologically, how it works.”

Here’s what you need to know about the 30-year-old actor, his personal life, and his roles over the years.

1. He Feels That Ryan Is the Most Important Role He’s Ever Played

To research his part of an Afghanistan war veteran, Lauria talked to actual vets.

“I’ve been in touch with all these veterans from Afghanistan who have been extremely generous with their time,” he said in an interview with The Hollywood Reporter.

He added, “This feels like the most important role that I’ve ever played.”

As far as the relationship between Amber and his character goes, he said, “This is a guy who desperately needs healing and he’s with a girl who has never had to be responsible for someone else or to be so invested emotionally in a relationship that it requires her to give of herself this much and be the guiding force to be the one to provide that kind of guidance.”

At PaleyFest 2013, Mae Whitman, who plays his ex, Amber, said, “Matt’s incredible. I love working with him. He’s one of my closest friends.”

As they reunite on screen in October 8’s episode, he said, “One of the things I think is so beautiful about the Amber and Ryan relationship is, you see two people with open hearts just battling to try and make it work, and against some very complicated odds. And you’ll see more of that. Other than that, I’m gonna let people sit back and see what they see.”

He is married to singer/songwriter Michelle Armstrong of the band Dame.

They met at a Denver airport when Lauria was just 16. “I made sure I hit on her. We were 17 when we started dating. And the rest is history,” he told Broadway.com.

In an interview with Girl Around Town, the songstress said of her ideal day, “Truthfully, doing anything, anywhere with my guy. Eating a BIG sweet apple and feeling some hot sunshine would be the icing on the cake.”

Watch her music video below. 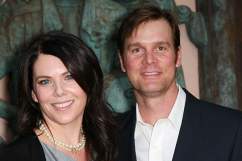 In Kingdom, a DirecTV’s original series that premiered on October 8, he plays Ryan Wheeler, an MMA fighter.

In an interview with Variety, he explained his new role:

It’s a highly complicated and psychological character, who’s multidimensional. There are so many conflicting aspects of what composes this guy. You hear it throughout the pilot, these stories of glory of this monster of a man. In this world of MMA, I think those who can be professional are exceptional; those who now have a winning record and can be professional are a notch above that; and then there are very few who are the type of champion who Ryan was.

Got DirecTV? Then be sure to check out the premier of KINGDOM starring my boy @MattLauria !!! Tonight at 9!!! pic.twitter.com/oAFbOIk7Hx

4.He Was on ‘Friday Night Lights’

In the fourth season of the show, Lauria came on as Luke Cafferty.

On the series finale of the high school football team-based drama, his character plans to enlist in the army.

At first, Lauria was disheartened and thought that Luke should go on to college and play football. He told Zap2it, “I was disappointed at first. I was bummed. I was like ‘No, he’s got to go to a Division 1 school and become a total rockstar! But that doesn’t happen, you know? I suppose I was still waiting for that very Hollywood ending, where in the eleventh hour some college shows up and Coach goes, ‘Luke, they want to see you.'”

The actor later realized that his ending was an accurate portrayal. “These are his options, and these are the options that a lot of young men, in more rural areas or inner-city areas, have. I loved it,” he explained.

5. He Starred Off-Broadway With a ‘Girl

He and Zosia Mamet headlined the Off-Broadway show Really Really, about a group of college students going through some typical coming-of-age drama.

The show ran from January to March of 2013, and Lauria made the transition to playing the same character seven days a week. He told Gothamist, “But I think it’s more that I can’t let go of the play. When I’m not there I’m constantly thinking about it. Did it go well? How can I tweak it? What can I dig deeper on.”

He also told Gothamist about his eagerness to work with Mamet, ” I was familiar with her work because my wife and I watch Mad Men. We still haven’t caught up on the recent season, but… I remember her work from that, and I’m a fan of Girls. I just thought she was making exciting and subtle choices in both roles, so I was excited for an opportunity to work with her.