There are rumors that the newly single Nick Cannon and Amber Rose may be romantically involved.

1. They Rode a Roller Coaster Together

On Friday, they were spotted at Knott’s Berry Farm in California enjoying the rides.

“Would I be out there at amusement parks and all over the place with somebody that I was trying to creep with?” he told TMZ when they asked if they were an item.

After six years of supposed wedded bliss and two children together, the couple recently called it quits.

“There is trouble in paradise,” Cannon exclusively told The Insider With Yahoo on August 21. “We have been living in separate houses for a few months.”

Cannon is denying he said that, and sent a multitude of tweets in his own defense, with these included:

And finally, “Trouble in Paradise” is the dumbest phrase I’ve ever heard! I would never say that sh!t

I love @MariahCarey and that will never change!!!

As far as the possibility of a divorce goes, Cannon dispelled the rumor months ago.

You kind of have to ignore it because every week it’s something different, and if you paid attention to it, it actually probably would start really affecting you…There’s no merit or truth to it. It’s kind of humorous, really. It couldn’t be further off from the truth, and it really affects the credibility of the so-called newspapers.

In response, Mariah’s publicist told Us Weekly, “I don’t comment on Mariah’s personal life, but Mariah is focusing on her children and her upcoming tour.”

On August 28, People reported that Carey was out in Manhattan without her wedding ring. 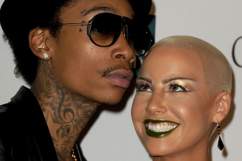 She is separated from Khalifa, the father of her 20-month-old son Sebastian Taylor Thomaz.

In an interview with Us Weekly, she said:

I’m okay. I’m doing pretty good. I am going through a divorce and technically I’m single I guess you could say, but I’m just not ready for [dating]. I’m focused on my son and I’m focused on work and I really don’t have time for a man right now.

When her ex sent her birthday wishes, she responded lovingly.

He hosted a party in Studio City in LA with celebrity guests in attendance.
According to Just Jared, it was a costume-themed 31st birthday party for Rose.

She dressed as zombie Peg Bundy, and dlisted posted the party pictures.

We’re super excited about her brand. I feel like she’s one of those people who are truly an icon when it comes to fashion, style, and even just someone in pop culture. I want to help her develop a lot of things and the first thing we are starting with is a book. We just did a huge book deal that we are really excited about.