Famed designer and fashion icon Oscar de la Renta has passed away at age 82 at his home in Kent, Connecticut. He is a true legend in the fashion industry and has catered to countless political icons, Hollywood elite, and socialites over the past five decades. Read on for the facts … 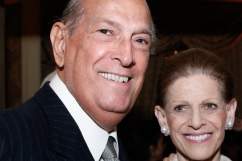 1. The Cause of Death Was Cancer

It’s been reported that Oscar de la Renta has battled cancer since 2006 and the NY Times reported:

His death was confirmed by his wife, Annette de la Renta. The cause was complications from cancer. Though ill with cancer intermittently for close to eight years, Mr. de la Renta was resilient.

CNN previously reported that the designer was said to be “totally clean” of the cancer in 2013.

He once told Gotham magazine:

A huge mistake we make is forgetting that one day we will die. We think that we are going to live forever. I always say life is a little like a garden. There is a time to plant, then a time you have to weed. Just think about people you’ve deeply cared for. And then think of the people you wish you’d spent more time with. I always say this: Live, love and laugh.

Echoing the above quote, Oscar de la Renta also told an audience in 2013:

The only realities in life are that you are born, and that you die. We always think we are going to live forever. The dying aspect we will never accept. The one thing about having this kind of warning is how you appreciate every single day of life.

2. His Haute Couture Is Coveted by All of Hollywood

Taylor Swift, Claire Danes, Jennifer Garner, and the rest of Hollywood all drool over Oscar de la Renta designs and have for decades. De la Renta is a true legend, having won an abundance of fashion awards throughout his life, including two CFDA Designer of the Year Awards, a CFDA Lifetime Achievement Award and two COTY Awards.

What a sad day for the fashion industry. An icon is gone. RIP Oscar de la Renta ❤️

He is the man every woman wants to hug! George and I wanted a wedding that was romantic and elegant, and I can’t imagine anyone more able than Oscar to capture this mood in a dress. Meeting him made the design process all the more magical, as he is so warm and such a gentleman.

It’s the most important dress in the life of a woman. Any girl from any walk of life dreams of that special dress, and I try to make that dream a reality for her. Amal and I looked at a lot of evening dresses and wedding dresses together, and we discussed what she liked. That gave me the idea of what she wanted.

In 1965, the designer launched his own label, and soon caught the eye of former first lady Jacqueline Kennedy. Other first ladies including Nancy Reagan and Hillary Clinton would follow suit, as well as a bevy of A-list stars, from Amy Adams to Sandra Bullock to Jessica Biel and countless others.

He once told a “Fashion Talks” audience:

My father had different aspirations for me than I had for myself. If I ever told my father I would become a fashion designer, he would drop dead on the spot.

5. He Leaves Behind a Wife and Son

Oscar de la Renta is survived by his wife, Annette Engelhard, a son named Moises, by three sisters, and by three stepchildren and nine step-grandchildren. He once told fashion head Fern Mallis that:

You have to appreciate every single day that you’re alive. Life is a little bit like a garden — you have to find time to plant the seeds for beautiful flowers to grow. I’m having a fantastic time. But I must say that I would have never been able to go through what I went through without my family and wife.

Prior to marrying Annette, de la Renta had a first wife. The NY Times reported:

In 1980, he and his first wife, a former editor named Francoise de Langlade, posed for the cover of The New York Times Magazine, with the headline, “Living Well is Still the Best Revenge.”