It’s the 2014 BBC Radio 1 Teen Awards and there are a ton of killer performances lined up. And, of course, a bunch of amazing teens to be honored for their strength and courage. Read on for all the info on how to watch the show online, details on the performers, the co-hosts, and see which band unfortunately had to cancel their appearance at the awards.

1. 5 Seconds of Summer Was Forced to Cancel Their Performance

they would say "minus one band appendix" pic.twitter.com/tzuy05B0Nz

Due to Ashton Irwin having appendicitis and being hospitalized, the band 5 Seconds of Summer has had to cancel their appearance at the 2014 BBC Radio 1 Teen Awards. For all the information on the cancellation, click here: 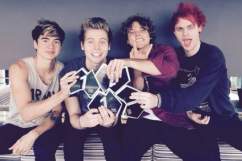 2. And the Performers Are …

Chuffed to be performing at @BBCR1's Teen Awards tomorrow! You can listen live on – http://t.co/VzRhWhSOwr – from 1pm.

The line-up of performances for the awards show includes The Vamps, Ariana Grande, Rixton, Labrinth, and Ella Henderson. BBC writes:

Two years on from Beneath Your Beautiful – his smash-hit duet with Emeli Sande, the man is back with huge single Let It Be – which he describes as “gospel and soul mixed with rock and electronic production” Stand by for an electric Teen Awards performance!

3. Rita Ora and Nick Grimmy Are the Hosts

The Teen Awards are one of my highlights of the year here at Radio 1. The crowd are always so up for it and the sheer noise of screams is out of control! I love the fact we honour teen heroes as well as pop stars. I can’t wait.

Big news! Actual @nickjonas is going to be at the Teen Awards tomorrow to present an award! pic.twitter.com/f8D1sBziyG

4. You Can Watch the Show Live Online

The vote for Best British single closes at 2pm today! Make sure to cast your vote! http://t.co/XjWOqjl8CD pic.twitter.com/iXVvJNmKb1

In order to watch the awards show online, click here. Here’s all the info:

Alive Levine and Greg James will be hosting a Teen Awards special live on Radio 1 from backstage at Wembley between 1pm and 5:15pm. Scott Mills will also have highlights from the Red Carpet in his show on Monday 20th November. You can also watch the event live on bbc.co.uk/radio1 and by pressing the red button on your remote while watching any BBC TV channel. If you’re not at home during the event, or if you were there and want to look back at all of the best bits, you can catch a special highlights show on CBBC’s Friday Download on Friday 24th November.

All of the TV broadcasts will be available on BBC iPlayer for 30 days, plus there will be exclusive clips and photos on the Teen Awards website.

The Teen Heroes are the focus of the BBC Radio 1’s Teen Awards. BBC writes:

The Radio 1 Teen Heroes are the centrepiece of Radio 1’s Teen Awards as three very special teenagers are recognised for their bravery, strength and selflessness.

This year’s heroes are Jack G., Jack M., Caitlin, and Shannon. Shannon was made homeless after her father moved away and now she’s an apprentice for helping employ young people with the Bridges Project. As for Caitlin, she looks after her younger sister who has the rare neurological disorder called Moebius Syndrome and helps to be the rock in her family. Jack M. was actually born with Moebius Syndrome and Jack G. is an anti-bullying ambassador after being bullied in school.

Huge congratulations to Shannon, another incredible #R1TeenHero. Find out more about her story http://t.co/Brz3TAByv7 pic.twitter.com/sY77UICk2P