Sarah Hyland is enjoying the life of a 23-year-old who happens to be on one of the most famous shows on television.

The Modern Family star, who plays the rebellious teenager, Haley Dunphy, recently made headlines after it was discovered she was in an abusive relationship.

The bright young star has already moved on, and seems excited about the new season of Modern Family, which aired on September 24. That day, she wrote on Instagram, “I can’t believe I’ve been working with this show for almost 6 years! I love these people with all of my heart and will never forget this blessing of a job ❤️️ Hope you all enjoy the new season!!”

1. She Comes From an Acting Family

In the clip above, we see her in one of her earlier roles, as Molly in the 1999 TV movie version of Annie.

Acting is in Hyland’s genes as both her parents are actors.

“All actors are dramatic, and growing up in a family full of them even more so! I have been watching Shakespeare since I was born. I loved it really early, and I fell in love with acting because it’s the biggest form of dress-ups you can do,” she told Cosmopolitan.

2. Her Boyfriend Was Abusive

She dated fellow actor Matt Prokop for five years, even sharing a home with him in L.A.

When they broke things off, in August, a rep for Hyland told Us, “Sarah’s doing fine. It didn’t work out. She’s young. They decided they would be better off as friends.”

However, TMZ reported that Hyland had to get a temporary restraining order against him after he physically and verbally abused her.

During one altercation, he choked her and repeatedly called her a “c**t.” As a result she suffered throat injuries. To end the relationship, Hyland enlisted the aid of her on-screen mother, Julie Bowen.

Bowen came to Hyland’s home, and Prokop was so angry at that, he threatened the life of her dog and threatened to burn her house down.

In her first appearance since that news broke, at a Teen Vogue Young Hollywood party, she seemed to be doing well.

“Her mood was cheerful. She looked like she was having a great time dancing and mingling with friends,” People reported. 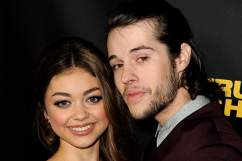 3. She Had a Kidney Transplant

The young actress had been suffering from kidney dysplasia since childhood. The condition would affect her daily.

She also told the show how the illness affected her on set, saying, “I try and make it so that Haley is always sitting down. If you notice, she’s always sitting down a lot…or leaning and texting. When Haley walks up the stairs that’s like my work out for the week.”

In 2012, the actress received a kidney from her father.

After the surgery, she opened up to Seventeen about the outpouring of support she received during that time:

You know that family is going to be there for you no matter what. My dad gave me a freakin’ kidney! But it’s also the families that you create outside of your family. And you really find out what kind of people you’re friends with. It was just amazing, and it really opened my eyes to see who’s there for me and who’s not.

4. She Gets Mistaken for Mila Kunis

In her first talk show appearance ever, on Ellen, Hyland dished about the actress she is always mistaken for, Mila Kunis. “I get it a lot,” she said in the clip above. “I love her. I’ve been a very big fan of hers for a long time.”

The first time they met, Kunis actually came up to Hyland because she gets mistaken for the Modern Family actress herself.
“People go up to her and say, “Hi, I love Modern Family, and she’s like, “Thank you so much,” Hyland explained.

5. She’s Not Part of the Young Hollywood Crew

In an interview with Vanity Fair, she explained that she is “more of a homebody.

“I’m not dying to be in that [‘Young Hollywood’] group, but if people put me in it, I’m really flattered. I’m more of a homebody type. I don’t want to look like I want to be in the public eye. I didn’t become an actress to be famous,” she dished.

The young actress was candid with her feelings about those actors who get involved with the wrong things:

It makes me really upset when I see stuff like that, because these people are talented. It’s not like they’re just kids who have a lot of money and are fucking up. So when I see people who are so talented get themselves into D.U.I.s or rehab or anything like that, it just makes me sad because you can tell that they’re really in pain; there’s something wrong. It’s a sad situation because they have all this talent and success, but something’s not there, something’s missing—so they replace it with drugs, or alcohol, or sex