Table Jack, “the longest lasting and affordable stabilizer ever made,” faces the Shark Tank on October 10.


The Answer is: ◀ GO BACK
Heavy spoke to president and designer Steve Christian about his company.

1. Steve Is a Restaurant Owner

The idea came from sheer frustration with wobbly tables, which cost Christian money and time. He was using self adjusting devices, but they would frequently need to be replaced.

“I, as many end users do, hated my wobbly tables, coming in to find napkins, sugar packs, etc., which cost me my paycheck and looked ugly,” he lamented.

One day, he decided to take matters into his own hands.

“…I took a table home, laid on my belly looking at and came up with the Tablejacks, a manual operated device, and made it strong enough to withstand the abuse that I know it got,” he said of the company’s beginnings.

Watch the video above to see Christian installing the stabilizer at Pizza Hut. The company praised his product, saying, “They are easy to work and get the tables up for easy cleaning under tables.”

A list of chains who use them, including Applebee’s and On the Border, is detailed on the company’s website. 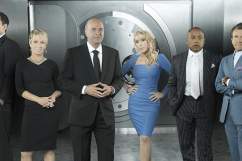 The kit comes with three table glides and a Jack that attaches to the fourth leg.

The owner is on your side, and realizes that not every product will be flawless.

Christian explained, “Now with my manufacture here in Houston I can keep the quality that makes the Tablejacks the most affordable, longest lasting, stabilizer ever made and I back it with a one year warranty. But keep in mind, with any product there will be some failure rate that’s why I back it.”

4. Steve Was Nervous to Face the Sharks

When asked if he was apprehensive when it came time to meet the sharks, he answered:

Nervous about being on Shark Tank is an understatement. Knowing you are pitching for you lively hood in front of 5 million that could change your life. But getting on TV deal or no deal will get you a deal if you want it. What I mean is there are only 5 VCs [venture capitalists] people there but a lot watch for new products as well.

Watch the demo above, to see how easily it works.