Tonight is the season 6 premiere of The Vampire Diaries. Read on for all the spoilers on Delena, new love interests, and episode details.

– Showrunner Julie Plec sat down with E! and revealed some details on the new season, like the fact that Elena will be getting a new love interest. Elena isn’t the only one with a love interest, though, Plec reveals:

Stefan has a love interest and we’ll find that out pretty darn quick,” Plec said. “I’m not making any promises on how well that’s going to go. Stefan’s created this whole universe that he wants to live in and he’s basically Mr. Denial.

– Elena will be kissing a guy who isn’t Damon in episode 3.

– The first and second episode of the season shows Elena getting over the death of Damon and her grieving process is a bit self-destructive. Nina Dobrev tells Entertainment Weekly:

We do fast forward four months, so the initial shock grieving, we’ve already surpassed. Now we’re seeing the second phase of it, which is eerily deceiving and odd. It’s not a very conventional way of dealing with grief.

Fans will know that when the show returns, Mystic Falls will now be devoid of any magic spells within its city limits. A force field much like from “Under the Dome” but without a physical dome, it prevents any supernatural creatures from stepping within the town border. This results to both Nina Dobrev’s Elena Gilbert and Candice Accola’s Caroline Forbes now being displaced from their respective homes and are forced find new dwellings in different places.

– Entertainment Weekly talks about how Damon and Bonnie, though they don’t really like each other, form a bond together as a result of the situation they’re in together. When it comes to Damon and Elena:

As for Damon’s drive to get back to Elena, Somerhalder says, “He’ll go through every length to make that happen. It’s a driving force in his life. Damon doesn’t give a sh– about very much except his home, his brother, and his girl.”

He’s pissed off. They’re stuck in a place they don’t want to be, and Damon’s fiercely loyal. He feels the need to get back to his family.

All the characters are going through all this crazy stuff that is really deeply rooted in their own emotional experience. Stefan [Paul Wesley] is making all these choices about what kind of life he wants to live next and it doesn’t necessarily involve anybody that he already knows. Caroline [Candice Accola] is really struggling with the fact that her friends are scattered and she can’t even go home and sleep in her own bed. Tyler’s [Michael Trevino] human again and is terrified that he’s going to do something to trigger his curse. Alaric [Matt Davis] is back teaching! And we’re dealing with the fact that he had to come back and start his live over but he doesn’t really feel comfortable in his own vampire skin.

Steven R. McQueen’s Jeremy Gilbert will definitely be seen going on a downward spiral (like Elena) as Bonnie is never to be found anymore. Meanwhile Alaric (Matt Davis) and Tyler (Michael Trevino) are also undergoing some ordeals on their own: Alaric dealing with the effects of becoming a new vampire while Tyler, the effects of not being one. 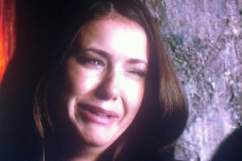