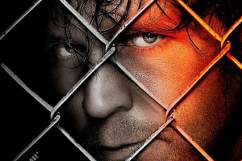 WWE‘s most hellish structure is back to confine two warriors and punish their bodies! WWE Hell in a Cell 2014 is here and the massive steel cage will be seen on two occasions. John Cena will take on Randy Orton in the Hell in a Cell, while Dean Ambrose will attempt to torture Seth Rollins inside the same structure. Stay with us as we detail the event’s match/promo results and highlights!

Results/Highlights: Once the bell rang, Henry ran at Bo and pounded him into submission with punches. Henry squashed Bo in the corner with a quick body splash. After ripping off Bo’s shirt, Henry locked Bo in the World’s Strongest Slam for the quick and easy win. After the match, Bo complained about Henry cheating (Bo just wasn’t ready). Henry made sure to exit the ring and slam Bo against the barricade.

Results/Highlights: The 1st fall saw Ziggler and Cesaro engage in some heated lockup exchanges. Cesaro powered out of Ziggler’s holds and eventually locked Ziggler in a stiff headlock. Ziggler fought out of it, but was quickly put down with a shoulder tackle. Cesaro locked Ziggler back in his tight headlock for a few extra seconds before Ziggler got out of it again. Ziggler and Cesaro then shared several near falls with each other before Ziggler landed a nice corners splash. Cesaro caught Ziggler with the Big Swing, but he got caught with a quick and successful roll up from Ziggler. The 2nd fall saw Cesaro rip into Ziggler with a nice European Uppercut and a double foot stomp to Ziggler’s gut. Cesaro went to land an elbow drop for the 2nd rope, but Ziggler dodged it at the last second. Cesaro quickly recovered and decked Ziggler with a swift right punch. Cesaro locked Ziggler in a arm lock/sleep hold hybrid for a while before Ziggler escaped once again. Ziggler ran in for quick arm DDT that seemed to do a nice bit of damage to Cesaro. Cesaro got back in the match by hitting Ziggler with a double foot stomp and a nice Snap Powerbomb. On the top rope, Cesaro looked to suplex Ziggler back in the ring but Ziggler laid out Cesaro’s injured arm on the ring ropes. Back in the ring, Ziggler locked on a nice submission hold. Cesaro managed to fight this submission hold by trying to power out of it with a suplex, but Ziggler continued to lock it in. Cesaro did the most amazing suplex ever by bringing Ziggler up to the rope while the submission hold was still locked in and landing a clean Superplex to Ziggler. After both men got back up, Cesaro missed a shoulder tackle to Ziggler and Ziggler countered with a quick Fame Asser. Ziggler went for his Zig Zag, but Cesaro pushed into the air and crushed him with another European Uppercut. A nice sequence of moves followed the pinfall attempt by Cesaro. It all ended with Cesaro catching a superkick and a Zig Zag. Ziggler won 2-0.

Results/Highlights: Brie and Nikki locked up with tons of intensity and got into some heated strike exchanges. Brie landed a few dropkicks on her twin sister and landed a few quick near falls. Nikki fought out of a Brie roll up attempt by landing a nice Electric Chair Drop. Nikki worked over Brie with several chokes and slams, but Brie turned int around and made a nice comeback. Brie caught Nikki with a stiff knee to the face, which forced Nikki to exit the ring. Brie followed her twin sister outside with a middle rope plancha. Nikki re-entered the match by hopping back into the ring and eventually hitting the Rack Attack on Brie. Brie managed to kick out of the following pin attempt and lock Nikki into the Yes Lock. Nikki escaped and stiffed Brie with with a hard elbow. Nikki then landed a 2nd Rack Attack and scored the winning pinfall.

Results/Highlights: Stardust and Jimmy started things off with a quick sequence of arm drags and strikes. Jey got tagged in and caught Stardust with a nice elbow into the corner. Stardust escaped the wrath of The Usos and tagged in Goldust, but Jey put him down with a quick elbow strike. Jimmy returned to the ring to land some nice double move exchanges on Goldust. As Goldust was getting beat down, Jimmy tried to throw him into Starudust’s corner but he was countered. Stardust grabbed Jimmy’s legs and flung his injured leg into the steel ring post. Both Dust Brothers then began tearing into Jimmy with bodyslams and constant submissions. Jimmy fought out of a submission and Bulldog attempt by dropping Stardust on his back. Jimmy also made sure to fling Goldust over his back to the outside of the ring. One Jey got tagged back in, he vaulted over the rope on two different occasions on both Goldust and Stardust. Jey landed several big moves on Goldust, such as his uppercut and Samoan Slam. Goldust soon made his way back into the bout by landing a nice spinebuster on Jey, but he only caught a 2-count. Jey kept his spirit alive and countered Goldust’s next move attempt with a Superkick. Soon, everyone ended up on the top rope. The Usos landed double superplexes on both Dust Brothers. The Usos hopped back up to the top rope, but Jey was the only one who got in a nice top rope splash. Stardust interrupted the next pin attempt. Stardust kicked out Jey’s legs while he was holding up Goldust. Goldust capitalized on it and finished off Jey with his twisting brainbuster.

Head to the next page to get more match results/highlights from WWE Hell in a Cell 2014!