1. Nicole Richie Was Their Matchmaker

Nicole Richie is married to Joel Madden, Benji’s twin brother, and she’s a friend of Cameron Diaz. She set up the two and the relationship was a surprise to many fans, but it seems that it was the perfect match. Richie previously stated she’ll take full credit for their getting together and told Andy Cohen on Watch What Happens Live that whatever the couple plans on doing in the future, she’s happy and fully supports them.

2. Benji Often Helps Out With His Brother’s Kids, While Cameron Diaz Says Motherhood Isn’t Exactly For Her

Nicole Richie has stated that her husband having a twin brother like Benji is great because he’s basically an extension of Joel, helping out with the kids when Joel isn’t around. Diaz, on the other hand, doesn’t really see herself as being a mother, telling Esquire:

It’s so much more work to have children. To have lives besides your own that you are responsible for – I didn’t take that on. … A baby – that’s all day, every day for 18 years. Not having a baby might really make things easier, but that doesn’t make it an easy decision. I like protecting people, but I was never drawn to being a mother.

If Diaz isn’t interested in motherhood, however, perhaps being an awesome aunt with Uncle Benji is up her alley.

3. Diaz and Her Man Are Reportedly Engaged, Though Neither One of Them Has Confirmed the News

Benji and love Cameron Diaz have been hounded with engagement rumors for months, but recently Diaz has been spotted wearing some bling on her left ring finger that’s been sparking engagement speculation. Glamour Magazine UK writes: Apparently Benji Madden and Cameron Diaz are engaged after a whirlwind seven month romance. The rumors started like most engagement stories do, after Cameron was spotted wearing a ring on THAT finger – and sources have confirmed to News Corp Australia that Benji proposed in October. 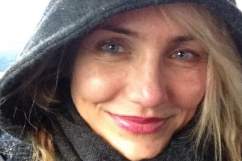 4. Benji Has Sold His Home

While he has a home in Los Angeles, Benji Madden recently sold his Glendale house that was formerly his “vampire lair.” Some speculate that, because of his relationship with Diaz, perhaps they are looking to get their own place together. The LA Times reported:

Benji Madden of Good Charlotte has sold his gated vampire lair in Glendale for his asking price of $2.135 million. The compound, which he bought a decade ago for $1.55 million, has an expanse of lawn and a motorcourt at the front, a guest house, a swimming pool and a pool house. The living room of the three-story house, built in 1951, features a brick fireplace and French doors and windows. A formal foyer, a winding staircase, a den, an office, a gym, four bedrooms and seven bathrooms are within the 5,346 square feet of living space.

5. Apparently, Benji Isn’t Thrilled When Friends Tease Him About His Relationship

Stopped by Fairfax and saw my buddies at @crooksandcastles today and got this Limited Futura Collab hoodie??? thanks fellas!!

According to OK! Magazine, a source revealed that Benji Madden gets annoyed when his buddies tease him about his relationship with Diaz.

His friends tease him about being henpecked. They’re calling him Senor Diaz and slamming him for being ‘so A-list now.’ He can’t stand it … Benji would love to just marry her in a drive-through chapel. ‘All the friends he wants to invite have to go through a rigorous security screening, and it’s embarrassing for Benji. ‘Benji had no idea what dating someone so famous would be like.’