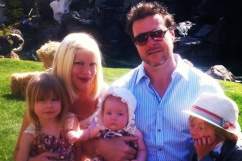 1. Shahnaian Found Out About Spelling’s Affair In a Tabloid

In 2007, Shahnaian opened up about his marriage to Tori Spelling in GQ Magazine, revealing that:

Fifteen months into my marriage, I opened the National Enquirer to see pictures of what appeared to be my wife giving another man a lap dance.

Shahnian says Spelling officially dumped him in her therapist’s office, where he was told that Spelling didn’t exactly marry him for the right reasons. “She had only married me because I loved her and took care of her,” he writes. “She had purposefully shown me only 10 percent of her true personality.”

Shahnaian was, understandably, very bitter about the way his relationship with Spelling ended, stating:

In the end, I didn’t screw up, she did. Well, some might say she screwed down, but that’s a matter of opinion.

Since then, Shahnaian has told Spelling that he has forgiven her.

2. Shahnaian and Spelling Had a Million Dollar Wedding

Spelling and her ex-husband met in Los Angeles in 2002 when Spelling was starring in his play “Maybe Baby, It’s You.” Shahnaian was married to Spelling from July 3, 2004 until April 20, 2006, in a million dollar wedding. Upon learning of Spelling’s affair, Shahnian filed for divorce just 15 months after the wedding. People previously reported:

Shanian, 39, is seeking spousal support from Spelling, 32, according to the divorce papers, filed Thursday in Los Angeles Superior Court. He also asked that Spelling be blocked from asking for spousal support, and that she pay for his attorney fees.

Spelling had released the following statement when her ex filed for divorce:

I went into the marriage with the best intentions, hopes and dreams. I feel that I’ve really disappointed people. I’ve disappointed everyone who came to my wedding. I’m disappointed in myself.

Was a member of Gotham City Improv in New York for many years and performed with them off- and off-off-Broadway. His IMDb reads:

Charlie Shahnaian was born in 1965 in Peabody, Massachusetts, USA. He is an actor and writer, known for Le Chase (2006), 10-8: Officers on Duty (2003) and The Redemption of Henry Myers (2014). Shahnaian has also had gigs as a writer and even worked on Tori Spelling’s show So Notorious.

4. Spelling Regrets the Way She Handled her Divorce

On Spelling’s reality show True Tori, Spelling goes to see her ex to get some closure. First, she makes herself sick and is unable to meet him, but when she finally sits down with Shahnaian, she has a breakdown. After seeing her ex, Spelling reveals to husband McDermott:

I regret the way I handled things obviously. He’s a good man.

Watch the video clip above.

5. He Was Not a Fan of Tori Spelling’s Mother

Tori Spelling and her mother Candy have had a rocky relationship over the years, having massive fights and going many months without speaking. Shahnaian wasn’t a fan of Candy Spelling either, telling GQ Magazine:

She liked to cast an icy glare and pretend to forget how to pronounce my name.’Sha-nay-an? No, Sha-nigh-an? Well, what’s the difference? Nobody knows it anyway.

Like many people, Shahnaian wasn’t a fan of his mother-in-law. 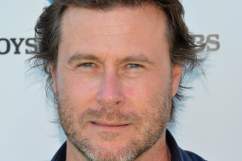