On the set doing promos for the BET awards.

Chris Rock came from humble beginnings, raised by a truck driver and a teacher, along with three younger brothers. He also had an older half-brother named Charles, who died in 2006 from alcoholism. Growing up, his parents sent him to predominantly white schools in Brooklyn, where he was bullied and beaten by white fellow students. Eventually, Rock’s parents had to pull him out of high school and he dropped out, later receiving his GED. Rock began working in fast-food restaurants, but in 1984, he started doing stand-up comedy and slowly rose to fame, amassing an estimated net worth of $70 million. Tonight, Rock is the host of Saturday Night Live. Read on for the facts on what to expect from his SNL appearance, his past on the show, his relationship with his wife, and his reported feud with comedy legend Bill Cosby.

1. Rock Is Hosting SNL With Prince as the Musical Guest

Chris Rock and Prince are the host and musical guest on Saturday Night Live tonight. Generally, the musical guest puts on two separate sets, but Prince will just be performing one segment, an 8-minute long segment, according to the Fashion Times. Check out Rock’s two promo videos to get ready for tonight’s show.

2. He Was Fired from Saturday Night Live When he Was a Cast Member

Chris Rock hasn’t been on Saturday Night Live in over 20 years, having been fired in the 90s. Laughspin reported an interview with Rock where he spoke about his firing:

[Rock]explains that were were certain things he was asked to do on SNL that he just flat-out refused to be a part of. Maron asks him for an example. “[Playing] a Ubangi tribesman or whatever… to where, not that I thought they were racist… [but I] was the only black face that was going to be seen for an hour and a half… it feels racist. It’s not racist. But it just feels like it when that’s all you see… If you’re on In Living Color and you’re a Ubangi tribesman there was a black thing before that and one right after it. There’s a context.”

Above you can check out a video clip from Rock on SNL.

Malaak Compton-Rock married Chris Rock on November 23, 1996 and the couple has two daughters together – Lola Simone (born 2002) and Zahra Savannah (born 2004). Malaak is the founder and executive director of StyleWorks, which is a non-profit organization that provides free services for women getting off of welfare and trying to start careers. In 2007, actress Kali Bowyer filed a paternity suit against Rock, claiming he fathered her son, but the test proved Rock was not the father. For more information on Malaak, check out the below link:

4. He’s Butted Heads With Big Wigs Like Bill Cosby and the Head of the Oscars

When Rock hosted the 77th Academy Awards, some of Rock’s harsh humor was not well-received by some of the A-listers as well as the academy. Insult comedy is often criticized and Rock’s style is no different. Even one of his comic icons has had issues with Rock, Bill Cosby. Cosby has reprimanded Rock for his notorious “Niggas vs. Black People” track and for his heavy use of the word “nigger” on many occasions.

Why does the public expect entertainers to behave better than everybody else? It’s ridiculous…Of course, this is just for black entertainers. You don’t see anyone telling Jerry Seinfeld he’s a good role model. Because everyone expects whites to behave themselves…Nowadays, you’ve got to be an entertainer and a leader. It’s too much.

5. The Comedy Everybody Hates Chris Is About his Childhood

In 2005, premiered Rock’s show Everybody Hates Chris, a comedy that he narrated and produced. The show is based on Rock’s childhood and the issues he went through growing up. Have a look at a clip from the show above.

Check out a real pic of Rock as a child below: 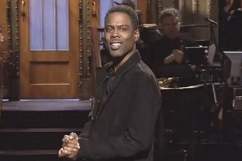