Claudia Jordan is a new cast member of the Real Housewives of Atlanta and she brings a whole new flavor to the show. Jordan tells Reality Tea, “I’m not like the other girls. I have a quirky sense of humor. I have a smart mouth sometimes. I’m a little rough around the edges, but I am real.” Throughout her career, Jordan has competed in pageants, worked on the show Deal or No Deal as a model and hosted on TV. Read on for all the details on Jordan, how she’s gotten along with her fellow cast-mates and more.

This super sweet dog was just food at Moorehouse College and us super malnourished and needs a good home! If you're interested please hit up @gee.pattz on IG or gpattonjr@gmail.com

In 2012, Jordan filed for Chapter 13 bankruptcy and dealt with depression. Jordan admitted:

I definitely had money and lost it all and got it back, lost it all again and now I’m on the upswing. I was a victim of some predatory loans.

The court dismissed her bankruptcy after a month, but Jordan still became depressed, revealing:

I remember I was depressed for a while to the point I was actually suicidal. I was very proud of buying all my real estate on my own and [then] my show got canceled, I went through a divorce, basically I lost my work. I hit rock bottom. I lost everything, including my real estate. Everything happened at the same time and I was depressed.I laid in bed for months, and honestly I didn’t work. I was depressed and I fell behind.

Jordan finally was able to repay her debts.

2. She Was Married, But the Marriage Was Annulled

Claudia Jordan was married in November 2009 and months later, the marriage was set to be annulled. TMZ wrote that Jordan filed for an annulment citing “fraud” as the reason. TMZ reported:

Jordan who told us, “He lied about everything … he misrepresented himself.” In particular, Claudia told us she believes Turner had a secret girlfriend throughout their relationship.

Her ex, who wishes to remain nameless, has come out that TMZ’s report is false. The marriage was annulled, but the other information is “untrue”.

3. Jordan’s Implied That Cast Member Phaedra Parks Had to Have Known About her Husband Apollo Nida’s Fraud Crimes

When Phaedra Parks appeared on the Ellen Show, she reportedly called Jordan “Satan Jr.” In return, Jordan appeared on the Rickey Smiley Morning Show and implied that Parks knew about her husband Apollo Nida’s illegal actions.

Women are natural detectives by nature. If your husband doesn’t have a job and all of a sudden he’s bringing in millions of dollars, you mean to tell me you don’t see a red flag when has this in his past? You’re a lawyer; that is your job to be up on game. I do not believe this for a second.

Apollo Nida is currently serving an eight-year sentence for bank fraud and identity theft. In addition, Parks has filed for divorce.

I will NEVER start mess w/ANYONE. I merely respond when necessary. I give EVERYONE the benefit of the doubt out the gate & expect the same

Claudia Jordan runs into trouble on this season of RHOA when she goes on a date with Porsha Williams’ “controlling” ex-husband Kordell Stewart. Jordan told OK! Magazine:

I’ve known Kordell for years. We go way back. I’m a big football fan and remember him in his heyday when he was a quarterback. It’s nothing exclusive.

According to reports, Jordan and Williams have patched things up.

Jordan was on seasons 2 and 6 of Celebrity Apprentice. Jordan’s charity on the show was the NAPSAC Foundation. On season 2 she was eliminated when the show premiered. Then, she appeared on the All-Star season, but was eliminated on the fourth episode. 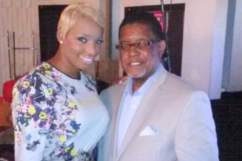