#Repost By @anjemiami "{CLIENT NEWS} @demetria4real on @bravotv website!! New Real Housewives of Atlanta star Demetria McKinney will make her Bravo debut when the show returns on November 9, but in the meantime she's celebrating a different type of debut. The video for "100," a new single from the singer/actress recently premiered on BET's 106 & Park. While the Housewives are no stranger to the music scene, Demetria's polished video and solid vocal ability may set her apart much of the pack. The 90s-inspired video for "100" features a verse from rapper Da Brat and shows off Demetria's dance skills as she pleads with a potential lover to just "be 100 [percent real]" with her. Although new to reality TV, Demetria starred in Tyler Perry's sitcom House of Payne for six years and has recently appeared in Devious Maids, Drop Dead Diva and The Rickey Smiley Show. Also keeping Demetria busy lately has been spending time with her new costars. She's been spotted out partying with Cynthia Bailey and fellow newcomer Claudia Jordan. #officiallydemetria #rhoa #100 #dabrat #realitytv #musicpr #music #pr #publicity #publicist #season7 #leggi" via @PhotoRepost_app

Demetria McKinney is an actress and singer who is now a cast member on the show Real Housewives of Atlanta. It’s the seventh season and McKinney isn’t the only newbie. Fellow housewife newbie Claudia Jordan has also joined the cast. Bustle.com reports:

Neither McKinney nor the other new addition, Claudia Jordan, fits the usual Housewife profile. McKinney is already a successful performer, not a regular businesswoman plucked from obscurity by Bravo producers; she’s played a character on a TV show before. But to be fair, she’s no A-Lister resting on her laurels — she’s working incredibly hard to make her way into the music business while also balancing single motherhood.

Read on for all the facts on McKinney, how she gets along with the RHOA cast, as well as the details on her relationship with longtime boyfriend Roger Bobb.

1. Roger Bobb Is her Longtime Boyfriend

#repost from my bo @cynthiabailey10 "Me & the very talented @demetria4real?" @cynthiabailey10 is not only beautiful outside, but she is gorgeous on the inside. Glad to have gotten to get to know her in the midst of the whirlwind that is #RHOA! Lol! #100

McKinney gets along with fellow cast member Cynthia Bailey (pictured above) because her boyfriend is good friends with Bailey’s husband Peter Thomas. Bobb is the head of Bobbcat Films and was the Executive Vice President of Tyler Perry Studios prior to that. He also produced the films that McKinney appeared in. Roger’s films in totaled have amassed over half a billion dollars in profit, making him a huge success.

McKinney teamed up with Da Brat and released her music video for the song “100”. Check it out above.

As far as her music career goes, her bio reads:

Demetria has extensive vocal and dance training. She is an R&B/Soul singer who has opened for artists such as Tank, Dwele and Anthony David. She has three singles available on Itunes “Take Away” and “Get Yo ..ish” and “Livin It Up” (her duet with Anthony David).

3. She Was Not a Kenya Moore Fan Prior to Filming

Moore and McKinney met over 10 years ago and McKinney’s impression of her was not a great one. She was very hesitant to film with Moore, especially after watching her antics on the show over the past seasons. However, McKinney found Moore to actually be very sweet when they started working together. Even with McKinney enjoying filming with Moore, there may be a hiccup this season when Moore reveals she’s interested in Roger Bobb, who happens to be McKinney’s boyfriend.

4. McKinney Is Known for her Role as Janine Payne in Tyler Perry’s House of Payne

McKinney starred as Janine Payne on Tyler Perry’s House of Payne for several years and that’s her most well-known character. Her bio states:

She was nominated for a Prism award for her incredible portrayal as the drug addicted mother and wife turned career woman. Demetria first worked with Tyler Perry on his stage play, Meet the Browns and went on to star in several other of his plays including What’s Done In The Dark, Why Did I Get Married, and Madea’s Family Christmas.

5. She Reportedly Suffers from a Disease Called Stargardt

Hoping your day was amazing…..

According to her fan site Dee Dee’s World, McKinney has a disease called Stargardt. The definition of the condition is this:

Stargardt Disease is the most common form of inherited juvenile macular degeneration. The disease not only causes the loss of central vision but also affects colour vision. With onset from about the age of 6, the effects vary from minor to complete loss of central vision. Stargardt disease, also known as fundus flavimaculatus, is usually diagnosed in individuals under the age of 20 when decreased central vision is first noticed. The progression of visual loss is variable. 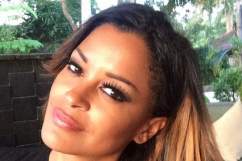