Eileen Davidson is a new cast member on the Real Housewives of Beverly Hills, raking in a record-breaking salary of $750,000 per season. Her tagline on the show is: I’m not a bitch, but I’ve played one on TV. Davidson is sure to bring some crazy moments to the show with a tagline like that. Read on for all the information on Davidson’s ex-husbands, her current hubby, and who she’s not getting along with on the RHOBH.

1. Davidson and her Husband Reportedly Got Together When He Was Still Married

Back in 2001, she was photographed going on a sexy weekend getaway to Vegas with her current husband, Vince Van Patten — but at the time, he was still married to another woman! Davidson’s husband of three years, Port Charles soap star Jon Lindstrom, filed for divorce from her in November 2000. Not long after, Davidson and tennis pro Van Patten were spotted embarking together on a whirlwind trip to Las Vegas — even though he was still married to Betsy Russell, the mother of his two children, Richard and Vince Jr., who were 7 and 5 at the time.

Russell reportedly filed for divorce from Van Patten once she heard about the affair. For more information on her husband Vincent Van Patten, check out the below link: 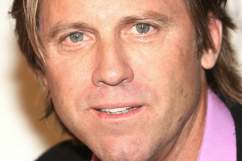 Brandi Glanville’s ex-husband Eddie Cibrian was caught in a high-profile cheating scandal with now wife LeAnn Rimes. Clearly, Brandi is not a fan of “the other woman.” With the reports about Davidson having gotten together with her current husband via cheating, Brandi believes Davidson to be a homewrecker and tells the cameras that Davidson is basically a slut.

Davidson has been married three times: first to actor Christopher Mayer from 1985–1986. Her second husband was former General Hospital, Port Charles, and As the World Turns actor Jon Lindstrom, to whom she was married from 1997 to 2000. Mayer and Lindstrom were both stars of TV series Santa Barbara, a show where Davidson also spent two years. None of them appeared on the show at the same time. She is currently married to actor Vincent Van Patten. They have 1 child together: Jesse (born in 2003). They met when he briefly appeared as her “boyfriend” on a cruise on The Young and the Restless.

4. Davidson Is an Author

In addition to being an Emmy-winning actress, Davidson is also a novelist. Her Bravo bio reads:

Always trying to stay busy and creative, Eileen has written four novels with prolific mystery writer Robert Randisi, three of which were published by Penguin Paperbacks. When not writing or acting, Eileen paints, surfs, and plays piano and guitar.

The first book was a mystery set in the soap opera world titled “Death in Daytime,” and it was released in October 2008. She followed it up with three sequels: “Dial Emmy for Murder,” “Diva Las Vegas,” and “Swinging in the Rain.”

5. Days Of Our Lives Recently Signed Her On for Filming