Tonight is the 18th annual Hollywood Film Awards, but the first time it will broadcast live on television. The festivities begin at 7:30 p.m. ET on CBS with red carpet coverage. The actual show rims from 8:00 p.m. until 10:00 p.m. ET. In addition, there will be a one-hour post-show featuring celebrity interviews and the awards show’s highlights from the night. The Hollywood Film Awards have been dubbed as the “Official Launch of the Award Season,” getting us all ready for the Golden Globes, Oscars, and more. Read on for the facts on what to expect from the HFA.

If you’d like to watch the awards show online, you can sign up for CBS Live TV, by clicking here.

1. Winners Have Already Been Announced

The Hollywood Film Awards have 18 categories of nominations that are voted on and some of the winners have been announced even before the show. Have a look at the winners below. 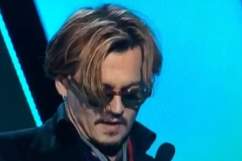 2. Queen Latifah Is the Host

Queen Latifah will be the master of ceremonies this year and Latifah is excited about the big event, revealing:

I’m honored to be a part of such a legendary award show. The HOLLYWOOD FILM AWARDS have been a staple in the awards season for years, and I’m excited to be the first host to bring them to television!

Queen Latifah, who serves as this year’s host, told “CBS This Morning” that viewers can expect “something crazy, something irreverent, something fun.”

3. Janelle Monae Is Playing With Her Band Throughout the Ceremony

Music artist Janelle Monae is scheduled to play with her band throughout the ceremony at the HFAs. For a little taste of what you can expect, check out Monae’s music video “Electric Lady” above.

This past year, Monae was supposed to carry on her tour “The Golden Electric Tour,” but was sick with an undisclosed illness and was forced to cancel the entire tour.

#JingTian in #GEORGESHOBEIKA as the newest member of #LOreal’s “Dream Team” and official #brand ambassador for #Asia. pic.twitter.com/VZMJMTTtxl

Jing Tian has been awarded with a big honor tonight. The Hollywood Take writes:

The 2014 Hollywood Film Awards will also feature the debut of the Hollywood International Award to honor those who appear in foreign-language films. Chinese actress Jing Tian will receive the inaugural award this year.

Tian is most known for her roles in The Warring States, Special ID, and Police Story 2013.

Hooray for Hollywood !!! the set first thing this morning for the @Hollywoodawards !

If you’re unable to watch the show, you can catch up on all the craziness with the help of CBS and the internet. Have a look at how to access all the photos, videos, and more.

Follow @HollywoodAwards for …
Behind-the-scenes photos from the red carpet, backstage and in the audience. You won’t see these exclusive photos of the biggest Hollywood stars anywhere else.
Digital Autographs from your favorite celebrities. Want to receive a digital autograph? Find out how!
Fashion cam videos and red carpet interviews, so you know what and who the stars are wearing.
Twitter selfies the stars take backstage and on the red carpet using our selfie Twitter Mirrors.
Fashion GIFs chronicling the actors and actresses honored this year and the stars that precede them.
Sidestage Interviews with the honorees, presenters and more.

Follow @PeopleMag for …
Vine 360 videos of your favorite stars. You can’t get a better view!
Red Carpet Interviews on the Samsung Stage with the biggest names in Hollywood like Robert Pattinson, Eddie Redmayne, Hilary Swank, Amy Adams and more.
Tweet using #HollywoodAwards and you may see your tweet on the Samsung Stage digital backdrop!