Thank you #Innovative and #NWE for the birthday audition! Hope I didn't make this face in the room. #bighairbigdreams #comedy #workbitch #LA

Kara Luiz stars on The Big Bang Theory tonight as Howard’s second cousin, Jeanie. (The one he admitted to losing his virginity to in a Toyota.)

Here are some fun facts about the actress.

In the November 6th episode of The Big Bang Theory, she stars as Jeanie.

In “The Prom Equivalency”, she goes to the gang’s makeshift prom with Stuart, who is now living with Wolowitz’s mother.

According to her website, she studied the art of improvisation at Second City Chicago and the Upright Citizen’s Brigade in L.A.

She frequently performs with her improv team called Used to Be Babies.

In the video clip above, which her husband directed, she plays a woman enraged when her coffee order is incorrect. 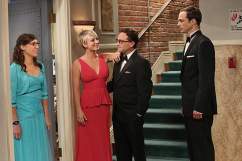 3. Her Husband Is a Director

She is married to director Oren Kaplan.

She’s on the MTV prank show Jerks With Cameras.

Watch her in the video above, where she tells people on the street to try to new energy drink and the reveals it’s made of urine.

In an interview with Zap2it, she said, “All the jerks have to be brave. You have to be willing to go out into public and mess with people and be yelled at. It’s a unique skill and I’m proud of it.”

However, she does admit to being nervous on the job. “I am the biggest scaredy-cat of the entire cast. I am always scared and I’m always nervous,” she said.

Although it can look tense on screen, the actors and the innocent bystanders all have fun in the end. “”It’s all in good fun. We’re laughing the whole time, the people we pranked end up laughing, it’s just funny,” she added.

She was scared of the fireworks and found comfort on my head.

Her Twitter profile quote describes her as an “Actor. Mother of Dogs. Lover of Mayonnaise.”