At the start of Season 7 of Duck Dynasty, Jep and Jessica try to take a romantic vacation, only to be interrupted by Uncle Si.

Here’s what you should know about their love story and family life.

1. They Met at the Hairdresser

They first laid eyes on each other at their mutual hair stylist, where they just simply said, “hello,” to each other.

A week later, they ran into each other at concert, and after that, started spending time together.

When asked where their first date was, Jessica told AL, “At first we just really hung out. Probably dinner and a movie. There’s not much to do in West Monroe.”

Since they were young, they didn’t have much as far as money went.

In fact, Jessica never had a wedding ring or went on a honeymoon.

In a blog post she wrote for A&E she said,

Now, of course, things are very different for the Duck Commander employee and his bride.

After a long but fun day filming with the entire family, it feels good to take off all the makeup and just cuddle with my soul mate! #nofilter

In an interview with Fox News, she explained how it came about.

When I first met him I was just hanging out with him and his buddies, a group of people from church would hang out and do Bible studies. We met in March 2001 and in April he baptized me in the lake and then we started dating in June. 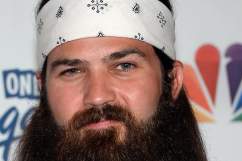 Jessica collaborated with her in-laws in writing The Women of Duck Commander: Surprising Insights from the Women Behind the Beards About What Makes This Family Work.

They had their children shortly after tying the knot.

In an interview with the Gospel Herald, Jessica said, “We didn’t even wait a whole year. We knew we wanted to start a family and wanted a large family. We were blessed to get pregnant quickly. We have four healthy, wonderful kids that God has blessed us with.”

When AL asked her what when the last time was that she was her husband sans beard, she said:

Uh, let’s see … Probably when River was a baby, he’s five now. He used to always grow it out in the fall and winter and then shave it once in the summer, but that ended about five years ago. [Laughs.] But I’ve grown fond of the beard. I like it. Even when “Duck Dynasty” is over I hope he keeps it.

“He’s got all these special lotions and perfumes that he puts on,” Willie told Us Weekly .

Jessica even tweeted about the products her man uses.

Jeps beard balm & other beard products are available to purchase! They are fantastic! http://t.co/TNytCdPB9a pic.twitter.com/DlwQTKTQYY