Guess who had to have been drunk at the Hollywood Film Awards tonight … Johnny Depp. Johnny Depp took the stage to present an award to Shep Gordon and appeared totally wasted. It was so embarrassing that it almost made you like Johnny Depp even more. First he made note of the microphone being the weirdest one he’d ever seen. Then he was kind of tripping over it. Finally he goes, “Okay, I’m going to read this thing.” He fumbled the words left and right and wobbled back and forth. Depp dropped a bunch of curse words and when he realized it was live TV, he covered his mouth and giggled like a school boy. The show finally cut him off to show a clip dedicated to Gordon.

So, what did Shep Gordon, accompanied by Mike Myers, think of Depp’s presentation? Check out their reactions in the below tweet: 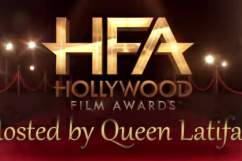