The last we heard about Stassi Schroeder was that she had found love and had permanently moved on from ex-boyfriend Jax Taylor. On the Vanderpump Rules reunion, Stassi couldn’t stop smiling and gabbing about how amazing her new boyfriend was … Stassi told Andy Cohen:

I’m in love. I’m really happy. For the first time, I feel like this is what being in love is supposed to feel like. This person makes me realize that all those other relationships were just getting me to him.

Of course, this hurt her ex Jax’s ears, but he said he was happy for her. So, who is the guy who has captured the heart of Stassi Schroeder? It’s a man by the name of Patrick Meagher. Read on for all the facts on the couple, as well as all the details on Meagher.

1. Stassi Had Left Vanderpump Rules to Move to New York With Meagher

When Stassi first met her boyfriend, the two were living on opposite coasts. Stassi stated:

Stassi then decided to move to New York to be with her man, telling She Knows about how it was living with Patrick:

Schroeder said that she and her boyfriend Patrick got to know each other very well when they lived in a 300-square-foot apartment in New York. The space was so small that her clothes inevitably ended up on the floor because there was nowhere to put them.

However, that didn’t last very long and the two decided to move back to Los Angeles together. Stassi had said she was leaving the show, but she returned anyway.

Patrick’s Facebook page is called “Cocks With P” after his Sirius XM Radio show “Cocktails With Patrick.” The About section of the page lists this info about the show:

Rumors are that Patrick is taking a hiatus from the show.

Apparently, Stassi was a fan of Patrick’s from a far for about three years and one day she reached out to him on Twitter. Stassi dished to Wetpaint:

I was listening over the summer and he was talking about soulmates and how his soulmate could be across the country, and I tweeted at him. He responded because one of his friends had said to him ‘You would actually like this girl.’ So my name was already in his head and I was out here two weeks later. We met, and it was like magic.

Stassi also stated that her entire family has met and loves him, which is a big deal because her sister has apparently hated everyone she’s ever dated. The above photo features Stassi and Patrick posing with Stassi’s mother and grandmother. 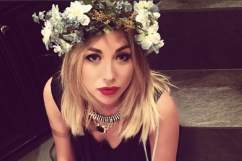 4. He Now Has a Sports Show Called The Wrap

It appears that Patrick has shifted his focus from cocktails to sports with “The Wrap” on Mad Dog Sports Radio.

5. Patrick Once Brought an Ex-Girlfriend on his Radio Show

Patrick Meagher doesn’t have a lot of personal information about himself online and he tries to keep things a bit private, but there was a point when he brought an ex-girlfriend named Chloe on his radio show. OKHereIsTheSituation.com writes:

Patrick has always teased his listeners by providing little information about his personal life. He apparently did bring ex-girlfriend Chloe on-air at a time when he felt some damage control needed to be done and professed his love for her. Chloe is also in the entertainment biz, working for hollywoodlife.com so Stassi may want to start googling to do some ex-girlfriend “research”.