Rachel Melvin is the newest buzzed-about actress in Hollywood.

The 29-year-old, who was 9 when the original came out, scored a role opposite Jim Carrey and Jeff Daniels in Dumb and Dumber To.

She plays Penny, who Harry finds out is his daughter. He sets out to find her with Lloyd by his side and chaos ensues.

Thank u all so much for the very sweet tweets about #dumbto. I'm so happy you helped make it the no.1 movie this weekend!! Thank u so much!

1. She Got The Part While Auditioning for a Car Commercial

In an interview with the Daily Herald, Melvin said, “I got this part in a really crazy way. It started with me going to a commercial audition for Dodge.”

The casting director of the commercial, who also happened to be casting the movie, really liked her.

The actress endured multiple reading until she was finally hired to play Penny. “It felt like the longest yes of my life. I actually had to take a job in a restaurant for the first time in 10 years,” she told the paper.

Although this is her breakthrough movie role, she is known on TV for playing Chelsea Benson-Brady on Day of Our Lives from 2005 until 2011.
The clip above shows her fist appearance on the soap opera. 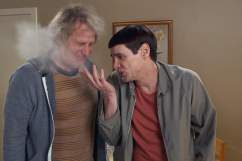 2. She Bonded With Jim

In the film, Jim Carrey’s Lloyd falls in love with her and vows to win her affection.

“I feel like when we’re acting it’s playtime,” she told Trailer Addict about working with Carrey.

She was impressed with the depth of the comedian and enjoyed their conversations.

In an interview with She Knows, she said, “We talked about humanity, the mystery of life and how we can be better people, which I appreciated because especially when you’re on set, so much of the conversation is about the business and that can only stimulate me for so long.”

The actress grew up as a fan of Carrey, so the experience was surreal. “Growing up I was such a huge fan of Ace Ventura, I never thought there would be a day when Jim Carrey was coming to my birthday party. But it’s so cool,” she told the Daily Star.

3. She Thinks Jeff Is Very Different From Harry

4. The Fountain Scene Was a Breakthrough For Her

Carrey imparted his penchant and skills with physical comedy on Melvin. The actress remembers a scene in particular that took her to a new level.

She told the Daily Star, “There’s one scene, the fountain scene we called it, where he really worked on me to get loose with my body. That was the day when there I had to do the most with my physicality. Obviously nowhere near as much as him. The control he has over the muscles in his body never mind his face is crazy.”

Melvin looks up to Carrey as a mentor. However, meeting him was a nerve-wracking experience.

In an interview with Fuse, she said, she was “trembling and shaking like a leaf” when she was introduced to him. 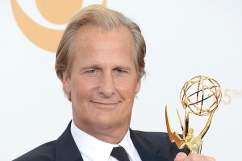 5. Jim Mentioned Her on ‘Letterman’

He told the host, in the video below, that Melvin told him she was “a little collicky” when the first movie came out.

Melvin was thrilled about her mention, telling OK! TV, “I watched it and I was like, ‘This is so weird. Jim Carrey saying my name to David Letterman.'”