Rock duo “Royal Blood” is performing at the 2014 MTV EMAs and to kick things off, they played two shows at the iconic Electric Ballroom in Camden. MTV reports:

Royal Blood took London by storm on Thursday (November 6) after delivering a triumphant set to an army of head-banging, mosh-happy fans just days before their performance at the MTV EMA in Glasgow.

Mike Kerr and Ben Thatcher recently appeared on BBC Radio performing a crazy cover of Pharrell Williams’ “Happy.” Check it out in the above video. Royal Blood are currently their a tour of UK and Ireland.

Aside from performing at the EMAs, what they’re most looking forward to at the event is Nicki Minaj. Kerr tells The Metro:

I am definitely looking forward to seeing Nicki Minaj in the flesh. Especially after that Anaconda video! Who wouldn’t want her to grind up against their drums? But she is the only one that can make that happen. I am stuck behind that drum kit. I can’t do anything! I’ve got my hands full.

As for what Thatcher has to say:

I am a married man! But Mike is having fun.

For more news on the EMAs, check out the below links: 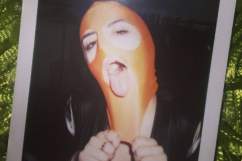