Days ago, she came out on Facebook saying she is intersex.

The 29-year-old swimmer, who is now in rehab, hasn’t commented since the revelation.

Chandler was born intersex, which means she has both male and female genitalia. The term is defined as “a group of conditions where there is a discrepancy between the external genitals and the internal genitals (the testes and ovaries).”

In an interview with Radar, she said, “I was born with male genitalia with no testicles, but I also have a uterus and no ovaries.”

On Facebook, she wrote, “I was never a man, never lived as a man. No one can say they knew me as a man or produce a photo of me as a man.”

2. She Was Formerly Named David Roy Fitch, But Had Her Penis Removed

In her early 20s, she had surgery to remove her male genitalia.

By the time I could walk and talk I made it clear I was a girl and dressed as one. In my early teens I was medically diagnosed and went on testosterone blockers, at 15 estrogen enhancers. My birth certificate was modified along with my name while I was a teenager, prior to any corrective surgery. 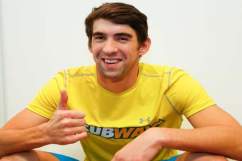 3. She Met Phelps on Tinder

Their first date was watching a Baltimore Ravens game at Phelp’s home, which led to sex.

“One thing led to the next, and we made love during halftime. Later, we had sex again. The intimacy with him was amazing! It was the first time in my life that someone has made me feel like a true woman,” she told Radar.

She waited to tell the Olympian until she felt the media pressure way too great.

On Facebook, she said, “I have dated many celebrities before, none of which knew my past. Michael Phelps and I met on Tinder and clicked. Spending time with him was like a teenage love affair. I have never felt so comfortable and accepted in every way as I did with him. I didn’t tell him about my past until threat of the media exposing me forced me too.”

4. She Thinks It May Be Over For Her & Phelps

In October, Phelps entered rehab after his DUI arrest in September. That’s when Chandler opened up with her story.

He hasn’t responded, and Chandler feels that’s due to his status. “Michael is a brand, and dating someone like me may not be the best thing,” she says. “I just hope he follows his heart and not what his people tell him,” she said.

Had a great night out in DC! #TaylorLianneChandler

The Mirror reported that she studied sign language interpreting.

She also got a degree in social and behavioral sciences.