Vincent Van Patten is the husband of Eileen Davidson, the soap opera queen and new cast member of the Real Housewives of Beverly Hills. Davidson comes on the show and is accused by fellow cast member Brandi Glanville of being a homewrecker and sleeping around. So, why don’t we get a closer look at Davidson and her husband Van Patten. Check out the facts below.

Betsy Russell and Van Patten were married from 1989 until 2001 and have two children together. Van Patten has another child with current wife Eileen Davidson. Russell and Van Patten were both actors and the two got engaged in August 1988. The two married on May 27, 1989 in North Hollywood at Dick Van Patten’s father’s Sherman Oaks home. Celebrities in attendance included Carl Reiner, Mel Brooks and Anne Bancroft, Wayne Gretzky and Janet Jones, Hugh Hefner, and Kimberley Conrad.

2. Davidson Reportedly Cheated With Van Patten When he Was Married to Russell

When Davidson and Van Patten first got together, Davidson was reportedly fresh out of her marriage with soap star Jon Lindstrom. Van Patten, however, was reported to still be married. Bustle.com writes:

Allegedly, Van Patten’s last marriage, to Betsey Russell, didn’t exactly end before he first met and got together with Davidson, but he and Davidson have been married since 2003 and seem very happy.

Davidson filed from divorce from Lindstrom back in 2000, after which she started a steamy love affair with Van Patten and the two were even spotted jet setting to Las Vegas together later that same year. However, Van Patten was still married to his wife when the affair began.

Van Patten is the youngest son of famous actor Dick Van Patten, who was best known as the father on sitcome Eight Is Enough. Clearly, Van Patten followed in his dad’s footstpes. Bustle.com reports:

Vincent spent his childhood guest starring on shows like Apple’s Way and Wonder Woman. His two brothers, James and Nels, also followed in their fathers’ footsteps and became actors.

When Van Patten was just a nine-year-old child, he was pushed into show business by his father’s agents and went on to star in over thirty commercials. In addition to his brothers being in the entertainment industry, Van Patten has other family members in the field – aunt, actress Joyce Van Patten, uncle Timothy Van Patten, and cousin, actress Talia Balsam.

4. Van Patten And Davidson Met on The Young And The Restless

Davidson is a prominent soap opera star and is on The Young And The Restless, where she reportedly met her husband. In fact, Davidson has recently signed on to become a part of the soap Days of Our Lives, pulling double soap opera duty. 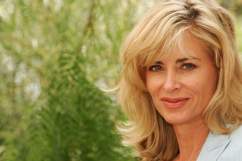 5. He Was a Professional Tennis Player

In the 1970s and early 1980s, Van Patten was a professional tennis player who was awarded the Association of Tennis Professionals (ATP) Rookie of the Year award. He doesn’t have a ton of tennis honors under his belt, but he did make it to the third round of the US Open twice. As far as the peaks of his career, it’s reported:

The highlight of his career came in 1981 when he defeated John McEnroe and two other top ten world ranked pros to win the Seiko World Super Tennis tournament in Tokyo. His career high ranking in singles was World No. 26, reached on February 11, 1982 … His highest doubles ranking was World No. 24, reached in September 1986.

Van Patten is currently the commentator for the World Poker Tour. His interest in poker came at age 14, learning from his father. He was actually crowned “King of the Hollywood Home Games.”