We have a ton of things to be grateful for in 2014. Just this week, we were blessed to receive two amazing trailers for two big time movie franchises. One for Jurassic Park and now this exciting teaser trailer for J.J. Abrams cinematic take on the Star Wars universe – Episode VII: The Force Awakens. Bask in the galaxy faring action seen in the video above and prepare yourself for the next intergalactic legacy of George Lucas’ brainchild. Take note, fans – this film is set 30 years after the closing of Return of the Jedi. 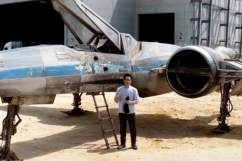