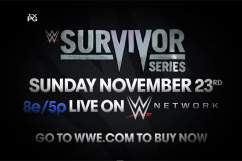 How to Watch WWE Survivor Series 2014

Hell in a Cell 2014’s ending was…puzzling. We were pretty perplexed to see Bray Wyatt return from the hole he was hiding in and attack Dean Ambrose. Now that their feud will culminate in a bout at Survivor Series 2014, we’re a lot more interested in seeing what transpires between these eclectic personalities.

Besides that major bout, John Cena will lead a team of as they head into a traditional Survivor Series elimination tag team match against The Authority. The battle lines have been drawn and we’re itching to see who turns on who during that climactic main event. Will Cena’s squad prevail or will The Authority maintain their control over the WWE?

Goldust and Stardust (c) vs. The Usos (Jimmy and Jey Uso) vs. Los Matadores (Diego and Fernando) vs. The Miz and Damien Mizdow (Fatal 4-Way tag team match for the WWE Tag Team Championship)

Predictions & Winner: We love The Brothers and Uso war that’s been going down in the past few months. However we have to admit – we’ve been growing a bit tired of watching them face off every other week and at the last two PPV’s. We’re glad that two more prominent teams on the roster have been added to this match lineup for Survivor Series 2014. Los Matadores and The Miz and Damien Mizdow will be joining the far for this Fatal 4-Way tag team championship bout. We’re going to hedge our bets here and give the nod to the current tag champs, Goldust and Stardust. This team still has a lot of mileage left in their championship run, so we think they’ll grab the win here. While it would be awesome to see The Miz and Damien Mizdow grab the titles here, we don’t think it’s in the cards…

Predictions & Winner: HEY, EMMA’S BACK! Other than that cool addition to a main PPV match, the rest of this match is filled with the familiar faces you’ve probably gotten attaches to on Total Divas. We’re banking on the divas on the left side to capture the win here. Make sure you pull out your Divas match stopwatch because these bout will probably come to an end pretty quickly. We think Nattie is going to be the last woman standing after she finally eliminates Paige.

Predictions & Winner: Hmmmmmmmm…we wish we could care about this match, but it’s simply an impossible task. To be quire honest, we still thought Paige was champion. Welp, the evil Bella twin will head into Survivor Series 2014 for a title shot against Divas champion AJ Lee. We see Nikki winning the title through nefarious means and become even more of an evil sister as she rules the roost alongside Brie. 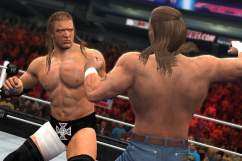 Predictions & Winner: These two are going to war and we can’t wait to see them tear each other to shreds. Both combatants are the type of off-kilter madman who could provide an entertaining brawl. Bray shocked the hell out of us at Hell in a Cell 2014 when he destroyed Dean during his match with Seth Rollins. When these two crazed competitors finally go at it, we think they may steal the spotlight for match of the night. We envision this bout getting a bit unruly and getting completely thrown out after the ref loses control. This is too good of a feud to just end in one month and on one PPV. They’ll engage in an entertaining battle, but we see both men getting this match thrown out due to their insane actions. Dean Ambrose and Bray Wyatt will go at it again in a more “hardcore” setting at next month’s TLC.

Predictions & Winner: This match right here is the main event that will impact the very landscape of current WWE. Cena will lead a squad comprised of Dolph Ziggler, Big Show, Erick Rowan and Ryback. Their opposition? The all-mighty Authority, which is being led by Seth Rollins and also features (Corporate) Kane, Mark Henry, Rusev and Luke Harper. This bout will be expectantly insane and include some of the evening’s most memorable moments. We see Cena focusing on beating down Rollins, Ziggler and Rowan focusing their efforts on Harper and Show and Ryback butting heads with Rusev, Kane and Mark Henry. So which team do we think will prevail? We’re gonna go out on a limb here and say The Authority will ultimately win. We see Cena and Rollins being the last two men standing. Shenanigans will ensue, Triple H and Stephanie will offer their star some aid and Rollins will sneak out a win for his bosses. And that whole thing about Team Cena getting fired? Trust us, that final stipulation won’t stick. Vince McMahon will find a way to overturn that brash decision.

Head to the next page to get a look at the best statistics seen throughout the history of Survivor Series!