Arrow has its season 3 Winter finale tonight at 8:00 p.m. on The CW Network and the episode is titled “The Climb.” The synopsis for tonight reads:

Laurel is surprised when her father shows up with a special Christmas gift – her mother, Dinah; Ray tries to make things right with Felicity; Oliver meets with Ra’s al Ghul.

As for some of the spoilers for the big finale, ComicBook.com has reported:

Oliver Queen will make to the city of Nanda Parbat, which is secluded high up in the eastern mountains. There, he will confront Ra’s al Ghul, League of Assassins leader and master of other characters like Malcolm Merlyn and the deceased Sara Lance. Ghul, who is traditionally a Batman villain, has been teased throughout Season Three’s first eight episodes as the string-pulling big baddie. But it looks like Arrow has finally had enough of the cat-and-mouse games, and is taking the fight to Ra’s.

Check out another clip from the finale in the below video and get ready for an action-packed finale. 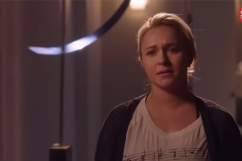