Ian McLagan has died after suffering a head injury following an accident in Texas. McLagan was a legendary rock ‘n’ roll keyboard player with the Rolling Stones and Faces. He was 69 years old.

KXAN first reported that Ian McLagan was in hospital in Austin with the head injury. The Austin Chronicle reports that the accident happen on December 1 and McLagan has been at the Bracekenridge Hospital since then. He died after a stroke on the afternoon of December 3.

It’s very insulting to be lumped together. It was nice to be thought of, but damnit, it’s too little, way too late. If that sounds like I’m ungrateful, then so be it. Fuck it. I’ve waited long enough.

3. He’s the Second Stones Collaborator to Die in 24 Hours

He also worked with the Rolling Stones during his career. His death comes a day after Stones saxophonist Bobby Keys died of cirrhosis.

4. He Was Supposed to Be on Tour With His New Band When He Died

McLagan had been based in Austin with his band, Big Bump, was supposed to be out on tour at the time of the accident. You can watch a video of him performing his song, “Never Say Never,” above.

McLagan pictured on the left with the Small Faces in 1965. (Getty)

He had been married to Keith Moon’s, drummer with The Who, estranged wife, Kim Kerrigan. She was killed in a car crash in Austin in 2006. 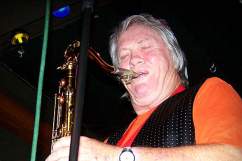