Tonight, James Franco was the host of Saturday Night Live and he opened the show with a shaved head, dressed in a suit. He opened his skit to talk about the hackers who leaked financial information about his new movie “The Interview.” So, he said he wanted to put everything out in the open before all his personal information got leaked. Then, Seth Rogen came on stage to warn Franco that all their personal photos were leaked online, in addition to their naked Christmas card together with Santa. Franco also made sure that everyone knows that any Instagram messages he sent girls this year were also from the hackers … He’s probably making light of the situation where a 17 year old girl put Franco on blast via Instagram. You can find out more about that situation in the below link: 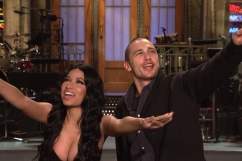 Check out some of the “embarrassing photos” leaked by the hackers in the below tweet.