Jenny McCarthy used to ring in the New Year by kissing a stranger from the crowd in Times Square. Now, she’s a married woman and that probably wouldn’t sit well with her husband Donnie Wahlberg, who’s standing by as she co-hosts Dick Clark’s New Year’s Rockin’ Eve With Ryan Seacrest. McCarthy has dished about her NKOTB hubby throughout the night and has stated that he is the man she will lock lips with at midnight. And, the two shared a passionate kiss together, celebrating the first time they met. The two met in Times Square when Wahlberg was performing with the New Kids On The Block.

Even though McCarthy will not be smooching any strangers, she is setting up two strangers from the crowd to share a midnight kiss. The two people will not see each other until the big pucker and McCarthy is excited to play matchmaker for the night. 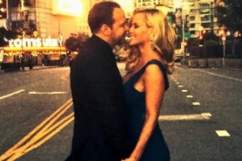