Jonathan Scott is one half of the Property Brothers. He lives with his identical twin, Drew, in Vegas.

They take us into their home in their new series, Property Brothers at Home.

Here’s what you need to know about Jonathan.

Please join @mrdrewscott and me to help support @NOH8Campaign #SpiritDay #AllyWeek! Equal rights for everyone is worth standing up for :)

Jonathan was studying business at the University of Calgary. After the brothers started investing in real estate, he went back to school for construction and design.

On their HGTV shows, Property Brothers, Buying & Selling and Brother vs. Brother, he assists homeowners in reconstructing their homes.

“The challenge is that I can’t just step in and do the work or make the design choices for the contestants. I strongly encourage against some decisions, but you’re dealing with a with a lot of Type A personalities … and sometimes they feel they know better. That of course makes for great TV,” he told the Las Vegas Sun. 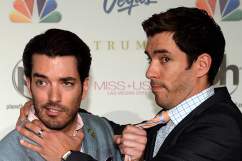 In fact, he was asked to be on The Bachelor, but he declined. “They actually asked me to be The Bachelor, but I turned it down. Now, Temptation Island is the kind of show I would be more interested in!” he told Parade.

The eligible bachelor told Glamour what he looks for in a woman. “I like someone who isn’t afraid to be adventurous and have a little fun. Sometimes this comes through in style, so I’d say that the outfit is only one of the first things I notice,” he said.

In the video above, at the Laugh Factory, he explains that he has been doing magic since the age of 7. “I got a magic kit as a kid and that was it for me,” he told Times Free Press.

In fact, he still works part-time as an illusionist in Las Vegas.

He actually appeared in an episode of X-Files and did magic.

The boys share a home in Las Vegas, close to their older brother, JD.

The not-so-humble abode, which is the focus of their new show, Property Brothers at Home, boasts a two-story water slide that spirals into a pool.

The brothers have made quite a name for themselves. In fact, the New York Times said, “Since Property Brothers had its United States debut on HGTV in 2011, they have become the faces (or the face) of home renovation on television.”

The best thing about working with his brother, he says, is understanding each other.

“We know what each other is thinking before we have to say anything. We step into a home and we both just know,” he told Modern Dog magazine.

The boys grew up on ranch in Vancouver where they had big dogs.

However, since Jonathan’s always on the go, he knew he needed to get small dogs.

He has two dogs, Gracie and Stewie, a Yorkie and a Chihuahua, and told Modern Dog magazine:

I like having two dogs, it lets them bond. Then, I got Stewie. I brought Gracie with me to check out our options, and she wouldn’t socialize with anyone but Stewie. They were instantly inseparable.

He also credits his city for having great dog parks for his pets.

“Oh, and the dog parks in Vegas are unlike anything you’ve seen. They’ve divided them into large-breed parks and small-breed parks. And there is always a third area that is not being used, so they can regenerate the grass. They have these fake fire hydrants out for the dogs. And great seating. I literally go every day when I’m in Vegas. The canine social scene in that city is great,” he said.