On tonight’s episode of Sons Of Anarchy, Juice meets his fate and you can watch the horrific scene in the above video clip. The Chinese are less than thrilled about Lin and take it out on Juice as they gang rape him in prison. Juice approaches Ron Tully because he knows that Jax has tasked Tully with killing him. The Chinese have let Juice live because they want Juice to kill Tully. Juice makes Tully aware of this in the dining hall, telling him that he knows that if the Chinese kill him before Tully has a chance to, it will put Tully in bad standing with the club. Juice doesn’t want that to happen, so, he sneaks a knife to Tully under the table. He asks that Tully wait for him to eat finish eating his pie. Once he’s done eating, he gives Tully the okay. Tully’s men start a big fight in the dining hall as a distraction and Juice stands still as Tully repeatedly stabs him in the neck, giving him a quick death. As Tully kills Juice he tells him, “You went out good sweetheart.”

Juice dies, lying in a pool of blood on the floor.

Juice wasn’t the only one to die tonight as Jax kills Unser and Gemma. Check out the below links for all the details on how Unser met his fate and how Jax kills his mother Gemma: 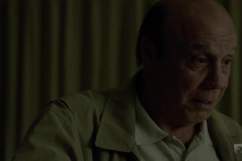 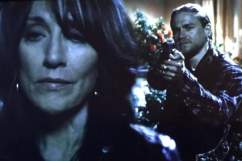 Read More
Celebrities, Sons Of Anarchy, TV
Who dies on tonight's episode of Sons Of Anarchy? Ron Tully kills Juice in prison and he dies with dignity.