Patrick Stump, singer/guitarist in the band, had the chance earlier to work with contestants as a guest mentor on the show. The band announced that they will be performing their hit “Centuries” from their upcoming album that is set to be released on January 20, 2015.

In addition to appearing on The Voice this week, just yesterday, Fall Out Boy released their new music video “American Beauty/American Psycho”. But, let’s focus on Matt McAndrew as he’s the contestant many feel is a shoe in to win. McAndrew’s performances are unlike any contestant and his coach Adam Levine is in love with him as a singer as well as a person.

Additional celebrities performing on the show tonight are reported to be Bruno Mars, Mark Ronson, Meghan Trainor, Ed Sheeran and Hozier. Plus, contestant Chris Jamison will perform with Jessie J, Damien Lawson is performing with Jennifer Hudson and Lynyrd Skynrd is singing with Craig Wayne Boyd. 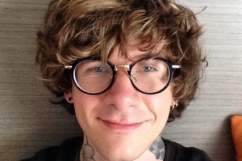 Matt McAndrew, ‘The Voice’: 5 Fast Facts You Need to Know