The Mayor of Pittsburgh, Bill Peduto, poses as a municipal employee, on Undercover Boss on CBS. Check out all the facts on Bill Peduto and his stint on the show as well as some of the sneak peeks on what to expect.

1. He Carried Labor-Intensive Positions On The Show

In disguise, Peduto works as a refuse worker from Environmental Services collecting garbage, a carpenter with the Housing Authority installing doors, a self-sufficiency coordinator helping community members in poverty,and an employee of the Forestry Division of the Department of Public Works who cuts down dead trees. Check out a clip from the episode above.

2. Peduto Wanted To Go Undercover To See If Rules He’s Implemented Have Worked

Peduto has only been in office for 10 months and wanted to see if the changes he’d made so far were working. That’s why he decided to join the show. According to Peduto’s personal website states:

Bill Peduto was elected to the office of Mayor of the City of Pittsburgh in the General Election on November 5, 2013. He has worked for 19 years on Pittsburgh City Council, as a staffer and Member of Council representing District 8, and resides in the Point Breeze neighborhood of the city.

Peduto serves as the 60th mayor of the city.

3. His Favorite Part Of The Experience Was the Rewards

To go undercover, Peduto had to change his mannerisms and his accents, but he said the best part of the experience was this:

His favorite part about going undercover was revealing himself to his employees and rewarding them for their hard work.

4. The Self-Sufficiency Coordinator Is The Only One Woman On the Episode

These bosses making dreams come true will make you cry like a baby. http://t.co/e2B6tBfrbr #UndercoverBoss pic.twitter.com/BpR7KATKNM

Kelly, the Self-Sufficiency Coordinator, is the only female on the show this episode, but each employee brings an inspirational story with them. CBS describes Kelly as:

Even though Kelly is barely making ends meet, she’s helping so many citizens achieve their dreams of getting jobs and owning homes. She also wants to own a home, but her 2 jobs aren’t enough to achieve this while her son is going to private school. When she became a single mom, she gave up going to law school in order to focus on her son and wishes she could go back.

5. There Were No Problem Employees On This Episode

James, Marty and Lawrence are the three male workers on the show this episode. James is a refuse worker, Lawrence is a carpenter, and Marty works for the Forestry Division. Here are there bios, via CBS:

James – James is a hardworking and generous refuse worker. He loves animals and has even rescued them from the garbage. James always has a smile on his face, even though he has struggled with throat cancer. He even selflessly takes care of his mom who suffered from bladder cancer.

Marty – Marty is a family man who works to improve the lives of his kids and the citizens of Pittsburgh, though he has had to make sacrifices. Having been attacked while in college, his finances were depleted and could no longer afford to get his degree. He does, however, stay positive; and work hard every day taking care of Pittsburgh’s public parks.

Lawrence – As a man who has struggled with his own demons, Lawrence knows how difficult it is to survive in a big city. Since overcoming an addiction he has been working hard to build anything needed by the housing authority. His true passion, however, is ministry. He’s ordained and licensed and dreams of one day having his own church. 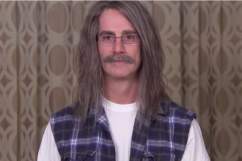