Christmas specials often have nothing to do with the actual storyline of a series, but fear not, PLL fans. Showrunner Marlene King promises drama on the Pretty Little Liars special. King revealed to People:

My children who have seen every episode of PLL watched the Christmas episode and said it was by far the most scary. Even though it’s not Halloween, the world we live in and the challenges the girls face and the life or death stakes “A” has presented them with give us a lot of opportunities for thrills and scares in this episode. I’m really happy about the balance that we struck. It’s very nostalgic and festive but at the same time really delivers on the scare.

On tonight’s episode, Janel Parrish returns to play the Ghosts of Christmas Past, Present and Future. As far as the future goes, King says that’s the scariest scene in the episode and says Mona shows Alison a frightening future.

She really shows Alison that if she doesn’t change her ways a very, very frightening fate will be coming her way.

Check out another sneak peek at the special, which includes behind-the-scenes footage, in the below video.

As far as Spencer goes:

She is out on bail and is still under arrest for Bethany’s murder. [The girls] are presented with an opportunity that should clear her name during the episode.

There’s definitely some answers in this episode. The girls uncover some information that is key to our plot moving forward.

Tonight isn’t all about the Christmas special though. Pretty Little Liars returns January 6, 2015 and we’ve got a clip from the new season 5B premiere below. Check it out. 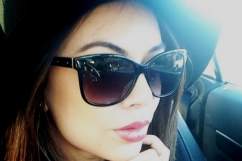