Shayna Terese Taylor, 38, was the woman in Ryan Seacrest’s life until they broke up earlier this month. Now, the Rockin’ Eve host, who just turned 40 on December 24, is single right in time for New Year’s Eve.

According to Just Jared, they went to dinner in London on November 29. However, just days later, on December 5, TMZ reported the breakup. The site explained that the night before, he was at the GQ Men of the Year party in Hollywood with an unidentified blonde.

Here’s what you need to know about their short-lived romance.

1. Ryan Was Spotted Socializing With Other Women

In February, TMZ published this video, with Seacrest at a Hollywood nightclub.

TMZ videotaped the American Idol host walking into a club alone. At the end of the night, two girls leave the club and enter into a car, the same one Seacrest gets into soon after.

Taylor was nowhere to be found. Her friend, who works at TMZ, commented on the evidence, stating that Taylor knew that Seacrest socializes with other women and was fine with it.

The picture above was taken in Italy and posted to Taylor’s Instagram account six months ago.
On December 12, Seacrest confirmed the breakup at Z100’s Jingle Ball in an interview with US Weekly.

He said, “I’m single,” which was enough to quell the rumors that his 18-month relationship with Taylor was over.

In July, the Daily Mail caught up with the couple in LAX after returning from a European vacation. When the paper inquired into what it was like to date the celebrity, she said, “It feels great,” later adding, “I’m a lucky girl.”

Her answer would be very different today, as evidenced by the Instagram message she posted just as news of the split emerged. 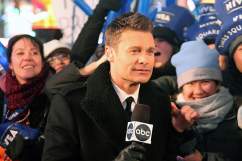 4. She Signed a Modeling Contract Because of Him

TMZ reported that because of her involvement with Seacrest, last December she signed a 2-year contract with Wilhelmina Models. Here is her page on the agency’s site.

According to TMZ, “…Shayna’s Instagram BLEW UP with new followers following the Thanksgiving holiday she spent with Ryan and his family in Argentina … and the modeling agency took notice.”

5. Ryan Dated Her Following His Breakup With Julianne

Taylor and Seacrest were first spotted together in Los Angeles in June of 2013, according to the Daily Mail. Seacrest had just broken up with DWTS‘ Julianne Hough in March, who he dated for three years.

At the time, a source told In Touch, “‘It’s a very new relationship and he thought it was a good idea to date someone who is closer to his age and not a 20-year-old.”