On tonight’s episode of The Voice, the Top 8 were narrowed down to five finalists in the competition. The contestants who were eliminated were Ryan Sill, DaNica Shirey and Luke Wade, while America chose to save Chris Jamison from the bottom four. Watch the eliminations in the above video.

Before learning the fate of the contestants two former faces from the show returned for big performances. Christina Grimmie came back and announced that she is going on a European tour, starting in January. Then, Raelynn returned, singing her new single and coach Blake Shelton couldn’t help but gush over her.

The four contestants announced as safe tonight were Matt McAndrew, Damien Lawson, Taylor John Williams, and Craig Wayne Boyd. This left DaNica Shirey, Luke Wade, Ryan Sill, and Chris Jamison in the bottom four. They each sang for their lives and America voted for their favorite. DaNica sang “I’d Rather Go Blind,” and then Luke Wade performed “Stand By Me.” After a short commercial break, Ryan Sill took the stage to sing “Heaven.” Finally, Chris Jamison performed for the save, singing “Georgia On My Mind.” 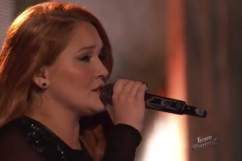 WATCH: DaNica Shirey Sings ‘These Dreams’ On ‘The Voice’ 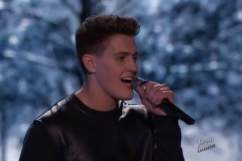 Read More
Celebrities, Christina Grimmie, Reality TV, The Voice, TV
Three contestants were eliminated on The Voice tonight, revealing the Top 5 finalists. So who was voted off? Chris Jamison was saved by America. Read on.