Tonight, it’s curtains for American Horror Story: Freakshow and we’ll be providing a complete recap live throughout the show, full of finale spoilers. The synopsis for the last episode reads: The freaks rebel against new management; Dandy prepares for his debut performances; Elsa arrives in Tinseltown. So, get ready for the blood and the craziness in the final episode, titled “Curtain Call.” Oh, and just a heads up … Neil Patrick Harris’ husband David Burtka makes an appearance in the finale as the new husband of Elsa. For more information on Burtka, check out the below link: 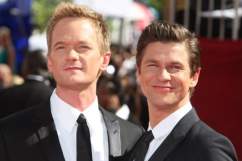 Now on with the show!

The episode opens with Dandy hanging a large sign to show that he’ll be headlining in the freakshow “Dandy’s Cabinet Of Curiosities”. The freaks are creeped out by him, but because he’s rich, they believe in following him, needing the money. Dandy is very demanding and becomes upset that no one has bought tickets to the show yet. He blames the freaks for being “old news” and says they need a new look. The freaks then turn on Dandy and tell him that he’s nothing special, that he’ll never be one of them. The freaks then quit. 10:04 p.m.

Elsa has arrived in Tinseltown and shows up to see a big wig at the largest corporation in Hollywood. She will not be seen, but insists on waiting. After waiting all day (coming in every day that week), the receptionist tells Elsa that he slipped out the back to avoid her. The receptionist insults her and Elsa snaps. A man comes out to help (played by Neil Patrick Harris’ husband David Burtka) and he says he’s the Junior Vice President of Casting. 10:13 p.m.

Dandy is in his tent grooming himself, decked out in a white and red suit. He then looks in the mirror and says “Showtime.” Armed with a gun, he begins killing off the freaks one by one, shooting each one in the head. It’s a massacre. One after another, the freaks we’ve grown to love this season are extinguished. Desiree Dupree, played by Angela Bassett, hears the gun shots and hides, and right before Dandy finds her, Amazon Eve jumps him. Unfortunately, Dandy wins that fight, but Desiree gets away. 10:20 p.m.

After the massacre, Bette and Dot are shown tied up and Dandy caresses their faces, telling them, “Come with me.” Jimmy shows up at nightfall and realizes that something isn’t right. 10:21 p.m.

When Jimmy walks into the main tent, he sees all of his fellow freaks dead and piled up to the stage. He screams and falls to his knees. His grief is interrupted by Desiree who grabs him sobbing. 10:23 p.m.

The next scene shows the twins marrying Dandy in his room at his mansion. It almost seems like a dream sequence. While both twins are not completely keen on being married to Dandy, he promises them a beautiful future with a lot of children. Dandy takes a sip of his drink and realizes he’s been drugged. The maid that the twins hired is actually Desiree and the twins tell Dandy that he’s been had. As Dandy is about to kill Desiree, the twins shoot him in the arm with his own gold gun. 10:32 p.m.

Jimmy shows up to the table next and gives Dandy an invitation to his own debut performance. Dandy then passed out. 10:33 p.m.

Dandy wakes up in a glass box (Houdini’s escape tank) with water in the bottom of it. Desiree and Jimmy tell Dandy that the only way out of the box is to escape. Dandy says he was only killing people because that’s what God put him on Earth to do. Dandy pleads with the twins to help him because he loves them. The twins tell Dandy they hate him and Desiree tells Dandy he is the biggest freak of them all. She then begins to fill his tank with water. They all stand around Dandy to watch him die and ignore his money offers and his begging. 10:41 p.m.

They then sit in the audience eating popcorn and laughing as Dandy drowns to death. 10:42 p.m.

Elsa has now become a big star, having married the man (Michael) who saved her when she arrived in Hollywood. Elsa is shown filming a coffee commercial and has an outburst on set. While smoking in her dressing room, Elsa continues to voice her upset about the gigs she has been booked for. In addition, she continues to berate her husband and then retreats to her mansion, where the man who made her prosthetic legs (Massimo) is waiting. Elsa tells him that she’s bored with her life and that she and her husband cheat on each other. 10:54 p.m.

I need to be with someone I love #AHSFinale pic.twitter.com/WfnpIwWvi9

Elsa wants to run away with Massimo, telling him she needs to be with someone she loves. Massimo tells her that he only has about a month to live and that he came to tell her “goodbye.” Elsa begins to cry and the scene ends. The next scene involves Elsa, her husband and the head of the network. They tell her that they’ve gotten their hands on the sexual and graphic films in which she lost her legs. Unfortunately, the network cannot stop them from being released and they also brought up the fact that she ran a freakshow in Jupiter, Florida. They then tell her that all her freaks are dead, that they’ll pay out her contract, but that it’s all over for her. Elsa says she’d like to participate in the Halloween special that she originally refused to do so that she can “go out with a bang.” 11:01 p.m.

The Halloween Spooktacular opens for The Elsa Mars Hour show and Elsa stands in a white pants suit singing “We Could Be Heroes.” Desiree is walking down the street with her children and husband Angus T. Jefferson and sees Elsa on a television inside a store window. Jimmy has married and impregnated the twins, who are sharing a normal life, watching Elsa’s Halloween special on TV. Now in case you forgot, a freak is never supposed to perform on Halloween because Edward Mordrake will come for them. 11:05 p.m.

We then see Twisty and Edward Mordrake with his other souls confront Elsa while she’s performing. Mordrake kills Elsa live on television, but says that her place is not with them. Elsa is reunited with her freaks in what appears to be her version of heaven, greeted by Ma Petite. Elsa says she doesn’t understand what’s going on and asks Ethel about paying for her sins. Ethel tells her, “Stars never pay.” Ethel tells Elsa they need their headliner. 11:10 p.m.

Donning the same blue suit and makeup from the first episode, Elsa makes her way into the spotlight to sing for a full crowd at the freakshow. Then everything goes black.