Gage Garmo, 17, was a dedicated fan of rap artist Eminem. Sadly, Garmo was a terminally ill teenager who recently lost his battle with the disease. Read on to hear about his dream come true and his fight with the disease.

1. Garmo Died One Day After Meeting His Idol

Garmo had dreamed of meeting Eminem and it’s almost as if the meeting set him at peace as TMZ reports:

Garmo died the day after Em arranged a secret visit to Gage’s home Sunday … and spent an hour talking and hanging out with him.

2. Osteosarcoma Was the Type of Cancer That Took His Life

Osteosarcoma is a type of bone cancer. According to Cancer.org:

Osteosarcoma (also called osteogenic sarcoma) is a type of cancer that starts in the bones. To understand osteosarcoma, it helps to know about the bones and what they do … In children and young adults, osteosarcoma usually develops in areas where the bone is growing quickly, such as near the ends of the long bones. Most tumors develop in the bones around the knee, either in the distal femur (the lower part of the thigh bone) or the proximal tibia (the upper part of the shinbone). The proximal humerus (the part of the upper arm bone close to the shoulder) is the next most common site.

This is the type of cancer Garmo battled.

3. He Worked At His High School

Garmo had a job working at his high school and the school paid tribute to him last night. TMZ writes:

A candlelight vigil was held last night by friends and family at Rochester High School — where he’d been the football team’s manager.

Clearly a football fanatic, Garmo’s other idol was Reggie Bush, who he got to meet as well.

4. His Meeting Eminem Was Made Possbile By Social Media

Social media has become such a powerful way to make dreams come true. Us Weekly reported:

Their meet and greet was made possible via social media efforts after Garmo’s friends and classmates spread the word that the teen, wanted to meet his idol before he passes away. Michigan-based charity The Rainbow Connection, which grants wishes to children facing terminal illnesses, caught wind of Garmo’s case, and set up a meeting within 48 hours.

5. A Fan Of One Direction Recently Passed Away From the Same Kind Of Cancer 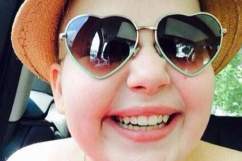 A girl named Caroline Richards was battling Osteosarcoma and she was a huge One Direction fan. Richards passed away about a week ago and fellow fans (directioners) applauded her bravery and strength battling the disease. For more information on Richards, have a look at the below link: