Tonight’s second episode of the back-to-back shows of Celebrity Apprentice featured a task to promote the health food brand Luvo. And the competitor sent home was … Gilbert Gottfried.

Terrell Owens was the project manager for the men while Vivica Fox was the project manager for the women. The womens’ team won, taking home $50,000 for Vivica Fox’s charity because the mens’ team was a bit inappropriate with Gilbert Gottfried’s sexual jokes during their presentation of the products. Kenya Moore and Jamie Anderson didn’t get along during this task, but in the boardroom is where the women really got cutthroat. Vivica Fox called out Shawn Johnson in the boardroom, getting down on her for having her period. Once they had left the boardroom, Johnson confronted Fox and was very upset that she announced she was on her period. Johnson thought it was trashy.

Terrell Owens decided to bring Gilbert Gottfried and Geraldo Rivera back to the boardroom with him. Gottfried said he looks at the show as a game. In the end, he was sent home. 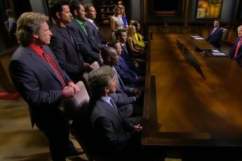