Henri Esteve now has to share his girlfriend, Gina Rodriguez, with the rest of the world. The actress just won a Golden Globe for portraying Jane on Jane the Virgin, and quickly became a household name.

The actor, who is in a hit show of his own, is very proud of her success and is not afraid to show it on social media. The feeling is mutual and Rodriguez seems just as smitten as well.

As the show returns tonight, learn more about the man who stole Jane’s heart in real life- Henri Esteve.

1. His First Major Role Was on ‘Revenge’

On Revenge, he played Javier Salgado, who joined the cast in Season 3 as a bad boy and love interest for Charlotte.

The actor, who trained in New York at the Lee Strasberg Theatre and Film Institute, embraced the character he portrayed. He told Revenge Updates, “I love Javier. There are a lot of feelings, I think Javier deals with that all of us deal with in some ways. That feeling of not knowing where he belongs, he’s this kid from the wrong side of the tracks that all of a sudden shows up in the Hamptons.”

In fact, when he came on the drama, he already knew one cast member- Joshua Bowman, who played Daniel- and felt welcomed into the cast right away. He told Entertainment Focus, “It’s weird too because I went to school with Josh (Bowman) in New York. The cast is so close and I got really lucky because everyone welcomed me into the family really quickly. I’ve always heard these stories of how difficult it is to come into a cast where everybody knows each other well and have been together so long but with Revenge they honestly made me feel at home so quickly.”

Esteve has nothing to worry about while his lady is on set at Jane the Virgin.
Rodriguez told TV Fanatic that the men she kisses on the show- Justin Baldoni as Rafael and Brett Dier as Michael- both have significant others, and she is grateful for that:

Thank God they’re both taken and I am, as well. We all stay very focused. We talked about that the other day. We’re like, ‘Oh, my God. We’re all taken,’ and it was like ‘yes, everybody on the show has a girlfriend and it’s great.’ We all stay focused. No tomfoolery in our set.

After Rodriguez won the Golden Globe for Best Actress in a TV Comedy- beating out names like Lena Dunham and Edie Falco- her supportive boyfriend sent out this tweet: 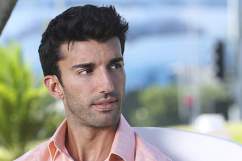 Justin Baldoni, Rafael on ‘Jane the Virgin’: 5 Fast Facts You Need to Know

A moment of cRi-Mas spirit from me and my bubs. #Miami #imCubanNow

His mother is from Cuba, and he told We are the Real Deal, “My mother was a huge role model for me. She is such a strong woman who taught me to work hard and that nothing is given, everything is earned. My brother who taught me the same things and helped create a man who runs on determination and heart.”

Cuban coffee with the Fam's Fam.

Rodriguez also has latino roots, as both her parents are from Puerto Rico. However, she is embracing her man’s heritage. In the Instagram photo above, that she posted during Christmastime, she used the hastag, #imCubanNow.

4. He’s Tired of People Asking His GF is She’s a Virgin

http://instagram.com/p/wAAX4bnLkl/?modal=true
Since she is playing a virgin who accidentally got artificially inseminated, the actress often gets the dreaded question asking if life imitates art.

In an interview with E!News, Rodriguez said, “Reporters have been very nice to me. I think it’s normally the fans and watchers who wanna ask me, ‘So, are you a virgin?’ And I’m like, ‘None of your business!’ C’mon! Typecasting! Method acting!”

Then she brought up the fact that Esteve is not too pleased, to say the least, over the inquisitions. “Talk to my boyfriend, he’s really upset about it. Just kidding, it’s inappropriate. It’s all inappropriate.”

5. He Started Off Broadway

As he began his acting career in New York City, he was a part of various off-Broadway productions. He’s also part of the cast of Microwave, a short film.
His bio on the movie’s site states:

Getting his start in the New York theatre circuit, Henri has starred in Off Broadway productions of Romeo & Juliet and Does a Tiger Wear a Necktie?