At the end of the mid-season finale of Revenge, Daniel intervenes after Kate attempts to kill Emily, and gets fatally shot, dying in Emily’s arms. As the show returns on January 4, we will see how Daniel’s family, including his mother, Victoria, and friends, deal with his death.

ABC released pictures from the episode, “Epitaph,” which include his somber funeral and mourning Hamptonites. As viewers also lament losing Daniel Grayson, learn more about the actor who portrayed him, Joshua Bowman.

In Us Weekly, he explained that his “heritage is English, Irish, and Russian Jewish with a light dusting of Italian.”
The 26-year-old was born in Berkshire and studied at Wellington College there. “‘I’m not a typical public school boy. I have a very eclectic mix of friends and I don’t like to be pigeonholed like that,” he told Britain’s Daily Mail.

To study acting, he came to New York City and enrolled in The Lee Strasberg Theatre & Film Institute. Manhattan appealed to the fledgling actor because of its similarities to his native London. “I always wanted to start acting in New York as the city is much like my home, London ‐ it has an energy, a history, character…something LA severely lacks,” he said in an interview with his school. When asked about his transition from London to Hollywood, he said, “The first thing I’ve learned is to trust nobody.”

In real life, the couple has been together since 2011, on the show they are ex-husband and wife. They maintain an air of privacy about their off-screen union, and hardly talk about their romance in interviews.

In an interview with Jimmy Kimmel, the host said, “You’re dating your co-star Emily VanCamp … that’s a terrible idea! Tell us about the first time you made love. Was your dad there?” Bowman answered, “No, but your mom was!”

VanCamp told GQ, “I don’t really ever talk about that part of my life, but I’m also not going to stop living my life. I want to live happily. And if I love a person, I’m not going to be ashamed and hide it.” However, she does sometimes spill about how great it is to date Bowman. In an interview with Women’s Health, she talked about how her boyfriend loves her, even covered in fish guts. “I was there in my baseball cap and these crappy fishing clothes. And I remember thinking, This is when I feel 100 percent comfortable, in these dirty clothes with fish guts all over them,” she said.

Life imitates art as far as their characters concerned. Bowman told Entertainment Weekly about his character’s heroic end on the show and feelings for Emily. “The person that Daniel really loved was Emily. He never loved anyone as much as he loved her. That was his true love and it was so fitting for him to die in her arms,” he said.

Van Camp approved of her boyfriend’s acting and tweeted this shout-out:

#JoshBowman owning that scene like a champ! Phenomenal work throughout the entire episode. 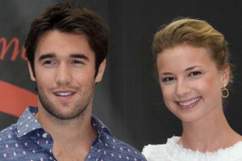 This was his breakthrough role, which made him a household name in the U.S. Watch the clip above, where he explains that he was not given the role right away.

The actor hasn’t discussed what his next career move will be, but he wasn’t against having Daniel killed off. In fact, in late 2013, he told TV Guide, “I’m trying to pitch a Daniel death by the end of the season. I love working on the show, but I’m just being honest. My character has flip-flopped the most, and it’s been so hard for me to play.” Bowman did challenge what he said there, and explained that he was misquoted. “I think I was definitely wrongly quoted by that particular reporter. It wasn’t a plea to leave the show at all. I mean, I love working on the show. I’d do it for six seasons,” he told EW.

4. He’s Been Linked to Singers

It was rumored that Bowman was dating Miley Cyrus after they costarred in 2012’s So Undercover. He denied the courtship, saying, “Well, it definitely wasn’t a relationship. We are mates and we did a movie together. She’s a very nice girl. There’s really nothing else that can be said.”

He was spotted on vacation in St. Lucia with Amy Winehouse in 2009. When GQ asked him about their relationship, he replied, “Yeah…I’m not really ready to talk about that.”

At the time though, Bowman was just starting out in business, living in New York and auditioning for roles. The Daily Mail quoted him with saying, “It’s true to say that I’m a budding young actor. But I’d rather get my name out there because of my acting rather than who I’m being photographed with. I wasn’t waiting until there was a photographer on the beach to put my arm around Amy.”

5. He Was a Pro Rugby Player

The actor also has an athletic side. He played for the pro rugby team Saracens in England until an injury prevented him from pursuing the sport.
He told GQ:

Well, I got to a certain level in the pros but then I get injured. And I kept getting injured. I felt f**king retired and then I was told I had to retire. I loved the performing arts in high school, but had no experience besides that. My friend was an agent and she agreed to take me on. I guess the universe was telling me something.