On tonight’s second episode of the back-to-back showings of Celebrity Apprentice, the contestant eliminated was … Kate Gosselin.

Tonight’s two project managers were Ian Ziering and Kate Gosselin. The show started out with Donald Trump moving Kenya Moore over to Team Vortex, which greatly pleased Team Infinity. The task for this episode was to create an interactive, themed environment for Trump National Doral in Miami. The three factors that each team were judged on were creativity, branding, and the overall guest experience.

Kenya Moore and Vivica Fox were at odds and Moore was texting project manager Kate Gosselin non-stop with complaints. When it came to the boardroom, Ziering was asked to pinpoint his weakest player and he regrettably named Johnny Damon. He said his entire team performed well, but if he had to pick someone, he would sadly pick Damon based on delivery of certain things during the task.

"They lost." And it wasn't even close. #CelebApprentice

Trump’s two sons judged the task and felt that it was Team Infinity who best represented what they were looking for. Though they felt that Team Vortex nailed the family aspect and loved their mascot, they felt they missed the mark on the purpose of the task as well as luxury.

Kenya Moore was under attack in the boardroom and she was very quick to defend herself. In the end, however, it was Kate Gosselin who was sent home. 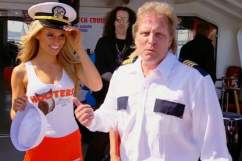