Charles Kelley, Hillary Scott and Dave Haywood- otherwise known as Lady Antebellum- are singing the National Anthem tonight at the CFP Championship. They posted the Instagram picture below in anticipation of the event.

soundchecking for the National Anthem tomorrow at the #CFBPlayoff

Here’s what you need to know about the dynamic trio that formed in Nashville in 2006 and became a musical success story only a few years later.

Their song “Need You Now” won 5 Grammys in 2011, including Record of the Year. After the ceremony, Scott gushed, “We were just honored to be there, let alone take the award home…It’s been a night we’ll never forget.”

As far as their hit song, Haywood said, “I don’t think we knew what it would do…The day we wrote that, we had no idea. We never set out to anything other than a song that meant something to us.”
Here is the official list of all their Grammys that they’ve accumulated in a short time.
Watch the music video below to their song that spent five weeks at No. 1 on the Billboard charts.

Sometimes…..he makes me so happy my ❤ almost explodes, and then I unknowingly pose like a teenager at prom. ?

Scott married drummer Chris Tyrrell in 2012. The pair met on Tim McGraw’s tour. Tyrell has toured with numerous bands, including Lady Antebellum. The couple has a daughter, Eisele, born in 2013.

Kelley is married to publicist Cassie McConnell. “We’re all married. True love is ups and downs,” Kelley told Radio.com. You hit, you miss. You’re fire and ice. But at the end of the day we’re not going anywhere. We feel that way in our personal lives and as a band. We’re going to have our ups and downs. We’ve been through a lot. We just have this long stretch of love. This long view of the group.”

One of my fave pics from the #CMTawards last night! Yay @ladyantebellum!! So fun pic.twitter.com/i12s2XWX

Haywood’s wife is Kelli Cashiola, who he married in April of 2012. As Director of Strategic Marketing and Business Development for Starstruck Management Group, her job entails working talent like McIntyre, Blake Shelton and Kelly Clarkson. 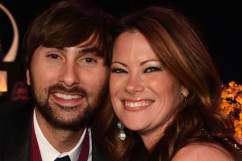 3. The Band Formed at a Bar

In an interview with Chelsea Handler, Kelley explained the he was at the same Nashville bar with Scott, and that was the start of the collaboration.

Scott continued, “He walked up to me and said she had heard some of my music randomly online and said, ‘I really like your voice.’ And I said, ‘Let’s get together and write some songs,’ which is a pretty typical Nashville pickup line.”

Kelley already knew Haywood, so Kelley said, “She came over about a week later and we started writing and formed a band [along with Dave Haywood] about a month or two later.”

Kelley’s brother is none other than Josh Kelley who is known for his song “Amazing” and being Katherine Heigl’s husband.

Scott also has music in her roots. Her mother is Linda Davis, who won a Grammy for her duet with Reba McEntire for “Does He Love You.”

5. They Have Ambitious Future Plans

The countdown is on….Bucks or Ducks? #CFBplayoff

Their newest album, 747, was released in September.
Scott told Billboard about the title track, explaining, “The track itself has this pushing, driving spirit about it that sums up our attitude right now. We are pushing ourselves as a band and as songwriters…taking ourselves out of our comfort zone and not taking ourselves too seriously. There’s an urgency and an energy to it that we’ve never released before.”

The band foresees a long and flourishing career. In an interview with Rolling Stone, Haywood said:

That’s how we want to make our living for 20 years: out there on the road. It’s a big focus for us. We change the setlist almost every night, trying to find the perfect setlist for the perfect crowd. That’s always been a priority.