Lindsay Lohan performs during a photocall for “Speed The Plow” at Playhouse Theatre on September 30, 2014 in London, England. (Tim P. Whitby/Getty Images)

It’s being reported that Lindsay Lohan is in a London hospital with a tropical virus she picked up in Bora Bora called Chikungunya. Her symptoms came on while possibly filming a Super Bowl commercial in Los Angeles.

1. She Was Vacationing in Bora Bora

According to TMZ, Lohan was vacationing over the holidays in Bora Bora, an island in the Leeward group of the Society Islands of French Polynesia.

Bora Bora is known to be an expensive getaway because it is in such a remote area of the earth. Because of this, it’s known as a hotspot for vacationing celebrities like Lohan.

Lohan left Bora Bora after Christmas but sometime before the New Year to fly to Los Angeles.

2. She Might Have Been Filming a Super Bowl Commercial

Rumor has it that Lohan flew to Los Angeles to take on Flo for Esurance. Flo is the happy Progressive spokeswoman who has become a leading lady in their canon of commercials.

TMZ reports that the commercial she flew to L.A. to film was for Esurance and that it is possibly for this year’s Super Bowl championship game.

During her stay in L.A., Lohan began to complain about not feeling well. 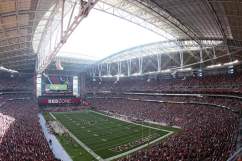 Where is the Super Bowl This Year?

3. She Then Flew to London

Lohan has lived in the British capital for nearly all of 2014 and considers London her home now.

After wrapping up her commercial in L.A., she flew home to London where she became very sick and was unable to walk.

She got checked into the King Edward VII’s Hospital, the very hospital where the royal family is also treated.

Lohan complains of a fever and joint pains, typical symptoms associated with Chikungunya.

As Bora Bora is a tropical island, it has an endemic mosquito population that carries Chikungunya.

It is usually found in developing nations in Africa and Asia, each having their own unique strand of the virus to their region.

It’s not known how Chikungunya ended up in French Polynesia, but the first case was reported in 2014.

According to the CDC:

Luckily Chikungunya isn’t considered a lethal virus. Less than 1 in 1,000 die from it.

However the symptoms can last for a few months and can bring discomfort like achy joints and sudden fevers.

We wish Lindsay well as she recovers!