Dinner with Donald and mai co hosts @nmoralesnbc and @thomasaroberts was so fun! Debating over whos gonna take the crown tomorrow night #MissUniverse Pageant LIVE Sunday at 8/7c on @NBC. Who u voting for??? @missuniverse #miami

Who are the hosts of the 2015 pageant for the winner of the title “Miss Universe 2014”? This year, Jeannie Mai, Thomas Roberts and Natalie Morales are our hosts, so read on for all the details on these three TV personalities.

Mai has been a fashion correspondent on E! News, Extra and for the Today Show, while also hosting the Emmy-nominated show How Do I Look? She is also a style expert for Perez Hilton’s website http://www.CocoPerez.com. Mai has an extremely long resume as a co-host on Stir, an entertainment reporter and producer of the WB’s Daily Mixx, a judge on Miss America: Reality Check, a food blogger for her site http://www.IHeartJeannieMai.com, a columnist of taste in Food and Wine Magazine … the list goes on and on. Prior to becoming a TV personality, Mai was a makeup artist for clients including Sarah Jessica Parker, Alicia Keys, Jennifer Aniston, Christina Aguilera, and Kelly Osbourne. Her official Miss Universe bio reads:

Jeannie has made it her mission to inspire, educate, and empower women. She recently received rave reviews as a speaker on the main stage at Maria Shriver’s The Women’s Conference immediately following other notable talent ranging from Donna Karan to Jessica Simpson and Jane Fonda. Deeply committed to a wide variety of charitable causes from Seven Bar to Dress for Success, Jeannie also uses her recognition as a fashionista as a platform to promote fledgling female designers and entrepreneurs from around the world by wearing their designs on-air and on the red carpet.

You may have seen Roberts as an anchor and journalist on Way Too Early as well as MSNBC’s Morning Joe and NBC’s Today. He has also worked for CNN Headline News, Entertainment Tonight and The Insider. Roberts is a big supporter of the LGBT community and his Miss Universe bio reads:

Roberts has also been honored for his work as an advocate in the LGBT community, and is the recipient of the prestigious Visibility Award from the Human Rights Campaign in October 2011. He was also honored by the Stonewall Community Foundation, Marriage Equality USA and The National Crime Victim Bar Association.

In 2012, Roberts married his partner Patrick Abner in New York City and they currently have two dogs together.

Natalie Morales has been a news anchor on Today since 2006 and she’s also been a reporter for NBC Nightly News with Brian Williams, Dateline NBC, and MSNBC. Miss Universe reports Morales’ awards in her career as:

In 2010, 2011, and 2012 she was awarded a Daytime Emmy award as part of “Today’s” recognition as the best morning news program. Morales was also honored with the 2013 Gracie Award for Outstanding Series for her Dateline series, My Kid Would Never.

Morales lives in New Jersey with her investment banker husband Joe Rhodes and two sons. Morales speaks both Spanish and Portuguese and was born in Taiwan. She grew up living overseas in Panama, Brazil and Spain as an Air Force “brat.”

For more information on the Miss Universe pageant, check out the below links: 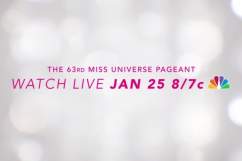 Miss Universe 2015 Pageant: How To Watch the Competition Online