Who's ready for tonight!?!? These guys are! Be sure to Tune in to the 63rd Annual #MissUniverse Pageant LIVE on Sunday January 25th at 8/7c on NBC

Who is judging all the 2014 pageant queens at the Miss Universe 2015 pageant? There are a wide range of celebrities on the panel to pick the best contestants in this year’s competition. Hosting the event is Jeannie Mai, Thomas Roberts and Natalie Morales. Plus, the performers are Nick Jonas, Prince Royce, and Gavin DeGraw. The reigning Miss Universe is Gabriela Isler and she’ll have to say goodbye to her tiara and title tonight. Let’s get to know some of the judges picking the winner and the new Miss Universe.

Emilio with fellow judges @MannyPacquiao and @Giancarlo818 at the #MissUniverse pageant pic.twitter.com/RAzJBIBac6

Jackson is a Washington Redskins wide receiver and return specialist, who is also a pro-bowler.

Garcia is a fixture on the fashion competition series Project Runway and is Creative Director of Marie Claire Magazine.

When the hands of destiny swing you into no mans land, you need to enjoy the ride till you swing back to reality pic.twitter.com/3obTRT4vGT

You may know Dyrdek from his shows MTV’s Ridiculousness and Rob Dyrdek’s Fantasy Factory, which are currently in their final season.

Revived?, Power to all my people!! Done looking like the dude on my shirt & back to being me?

Stanton is a Miami Marlins right fielder, a two-time Major League Baseball All-Star and he also attained the biggest contract in sports history.

Pacquiao is a congressman and an eight-division world fighting champion.

Cavallari is a former reality star from Laguna Beach and The Hills, who has now become a TV host and shoe designer for Kristin Cavallari by Chinese Laundry.

So.. I'm about to post this pic and wish you all a great Saturday and my son told me to write this.. Daddy.. Put this " Going for a ride in my sons car " lol

Levy is a heartthrob on TV and film, as well as in life and he’s previously been named People En Espanol’s Sexiest Man Alive. He also was a contestant on Dancing With The Stars.

Lisa Vanderpump is a star on two Bravo hit shows – Vanderpump Rules and The Real Housewives of Beverly Hills.

Louise Roe is a fashion journalist, author, and the host of “Plain Jane” on MTV International and the upcoming TLC fashion series, Style By Jury. 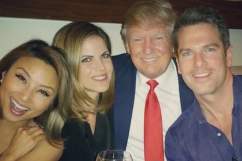