Piers Morgan returns to the Celebrity Apprentice as an adviser on the premiere episode, featuring the 2015 cast. Morgan is often ridiculed by others in the entertainment business. For example, Chelsea Handler and Kathy Griffin have each mocked him or spoken ill of him publicly. Morgan is known for waging Twitter wars against other celebrities and is often called one of the most hated celebrities. Nonetheless, he’s a success with a net worth of $20 million and he’s married to beautiful British journalist Celia (Walden) Morgan. The two started dating in 2006 and married in 2010 in a private ceremony in the Oxfordshire village of Swinbrook. They have one child together, making five children for Morgan.

Tonight, Morgan judges a new round of contestants on the premiere of Celebrity Apprentice, alongside Donald Trump and his daughter Ivanka. The contestants have a task related to the brand Pie Face. Pie Face is an eatery with franchises all over New York City. They specialize in mini pies and coffee. Another big personality who will be judging on tonight’s episode of the show is the Cake Boss himself, Buddy Valastro. He picks the best tasting pie of the teams.

BACK IN THE BOARDROOM! Tune in tonight at 9pmET for @ApprenticeNBC season premiere > http://t.co/zSmYclmxz7 @realDonaldTrump @IvankaTrump

For more information on tonight’s premiere and the cast, check out the below links: 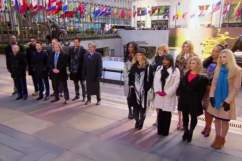