This just might be our favorite pic ever. @ryanseacrest and his furry friend @RealGrumpyCat!

Ryan Seacrest is a staple in American television, a pioneer, and the host of American Idol, of course. He’s one of Hollywood’s most eligible bachelors and he’s a man of many talents. Read on for the facts on Seacrest’s not-so-picture-perfect childhood, his recent break up, and more of Seacrest’s latest news below.

There was a lot of hype that Seacrest would lock lips with Taylor Swift at the stroke of midnight on New Year’s Eve this year, but it didn’t happen. Last year, Seacrest kicked off the New Year with a smooch from Miley Cyrus, who had performed. Swift was the big headliner this year and viewers were pantinc, waiting for Swift to lock lips with Seacrest. It just didn’t happen, which prompted Twitter followers to tweet photos of themselves kissing their television sets, giving Swift her New Year’s kiss.

just a day away #idol

Ryan Seacrest is talked about as the hardest-working man in show business, who has his fingers in many pies. As a producer, radio host, American Idol host, and businessman, Seacrest has accumulated a fortune of around $300 million.

His annual salary is $65 million.

3. Seacrest’s Last Break Up Was With Model Shayna Taylor In December 2014

Shayna Taylor is a fitness trainor and model who was working at the Slide Bar Cafe when she met Ryan Seacrest. They were first spotted together in June 2014 and carried on a relationship for a few months, until their split was reported in December. For more information on Taylor, check out the below link:

4. He Struggled With His Weight As a Kid

This picture of Ryan Seacrest as a kid, makes me believe there's still hope! pic.twitter.com/gxdGXm3U1w

Ryan Seacrest wasn’t always the thin, good-looking guy he is today. As a child, he struggled with a weight problem, revealing to Mens Fitness:

I remember it vividly. Like going swimming and not taking off my shirt before jumping in the pool because I was a chubby kid, or going to shop for the first day of school and being in the husky jeans section at Marshall’s. I do remember that feeling of growing up and being a little bit overweight. I also remember at times being teased about it and because of that it’s still in my brain. I never want to feel that way again, and that motivates me to strive hard for balance without cutting anything that I truly enjoy, but while also knowing I can’t have it all the time. As a kid, I would go home—my mom didn’t always know I was doing this—and I’d sneak in and make a plate of nachos on a cookie sheet. I’d lay the cheese on top with some jalapenos and crank the oven up to broil, just to get the cheese brown.

In order to maintain his physique, Seacrest makes it a point to be in the gym at least 5 hours a week, explaining:

I schedule my workouts as if they were meetings, and I make sure they don’t get canceled. I make a deliberate plan to fit in a workout each day of the week within my schedule. I’m adamant about exercising during the week to keep up with the different moving parts. I’m most productive when I have a chance to exercise during the day.

He says that remembering how he felt as an overweight child often helps him keep motivated to exercise as an adult.

Typo, the company co-founded by Ryan Seacrest that makes a physical keyboard for the iPhone, is now trying to solve the problem for the iPad, too. It has developed a Bluetooth keyboard that it claims is the world’s thinnest for the tablet. One version of the sleek keyboard works with the iPad Air and Air 2, while another is compatible with all models of the iPad mini. The keyboard comes in at a svelte 5.5 mm thick, but it maintains full key size for more accurate typing. The Typo keyboard does have its own battery and will need to be charged, but it will likely last you multiple battery cycles on your iPad. 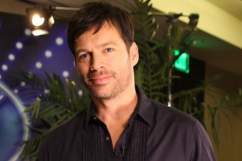 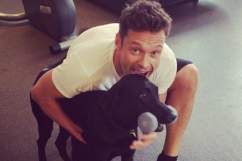 Who Is Ryan Seacrest Dating?