On January 23, Shark Tank re-aired its episode from October 3rd of last year.

Watch the episode in its entirety above. Here is our insight into the companies that were featured, in order of their appearance.

The adorable washcloths, such as Taylor the Turtle, Jackson the Whale, Shark the Tank, Hunter the Gator, Emma the Duck, and Harper the Hippo make bath time fun.

The founders, Ray Phillips and Alvin Uy, are both dads, so have a special connection to the innovation.

Watch the video above where the founders tell their story. On the show, the men declined both offers they received. Daymond offered $260,000 for 33 percent of the company. Lori Grenier and Robert Herjavec offered a million dollars to buy out the entire company.

On this episode, Villy Customs, a company that was given a deal in Season 3, was revisited.

Heavy interviewed Fleetwood Hicks, about the business that allows clients to custom make their bicycles. He explained that the company has grown tremendously since Mark and Barbara gave him a deal in 2009. They’ve sold in all 50 States as well as abroad.

Celebrities like the band One Republic, Ellen DeGeneres, businessman Jerry Jones, and NBA star Rashad Lewis also own them. “We are putting one together now for Kelly Slater, who is probably the greatest surfer of all time with 11 World Championships,” Hicks added.

To read our facts on the company, see below.

The scarves are made out of cashmere, and some of the more expensive ones are sold for over $200.

The company also makes stud collars, cross body leashes, and dog harness shirts. Daymond John gave Heart a deal of $50,000 for 40 percent of the company, which she accepted. 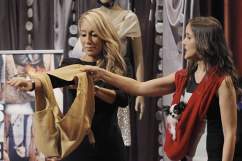 Ninja Cards is a card throwing game started by coworkers Ken Haton and Dustin Berk. They did not get an offer from any of the sharks. Last year, Heavy spoke to Haton to get a sneak peek into their appearance on the show and a inside look at their company.

The idea came from the men spending lots of time in hotels and amassing many room key cards. Haton explained, “We would spend so much time in hotel rooms that we eventually had a huge collection of hotel key cards. One night we decided to make a game throwing these cards at bottles and cans and the idea stemmed from there.” 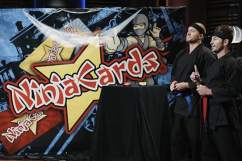