UFC Light Heavyweight Champion Jon Jones was triumphant over his latest opponent in the Octagon at UFC 182, Daniel Cormier. But in one of the more shocking post-fight news stories we’ve ever seen, Jon Jones tested positive for cocaine and is now entering himself into a rehab facility. Here’s everything you need to know about Jones’ current drug-related predicament and how the UFC and Nevada State Athletic Commission has responded to it all.

It was shockingly revealed on Tuesday (January 7, 2015) that current UFC Light Heavyweight Champion Jon Jones tested positive for benzoylecgonine, which counts as the main additive found in cocaine. Traces of cocaine were found in Jones’ system through a urine test on December 4, 2014, a month before Jon Jones was scheduled to face off with Daniel Cormier at UFC 182.

Jones’ urine test sample was analyzed by a World Anti-Doping Agency-approved laboratory in Salt Lake City. The results of this sample were then issued on December 23, 2014. The news regarding Jones’ urine test results then became public after its reveal via the Nevada State Athletic Commission.

Joe Rogan, commentator for the UFC, actually found out about the news live-on air during his podcast. Check out the video footage of his reaction above.

2. Jones Has Already Entered Himself Into a Rehab Facility

Upon learning of his positive test results for cocaine, Jon Jones immediately decided to enter himself into a drug treatment facility in New Mexico. Jones issued a public apology to his family, friends and the UFC in a public statement given to Yahoo Sports:

With the support of my family, I have entered into a drug treatment facility. I want to apologize to my fiancée, my children, as well as my mother, father, and brothers for the mistake that I made. I also want to apologize to the UFC, my coaches, my sponsors and equally important to my fans. I am taking this treatment program very seriously. Therefore, at this time my family and I would appreciate privacy.

Reebok, one of Jones’ sponsors and now an offical apparel partner for the UFC, went on to note that their business dealing with Jones has not ceased due to his current problems. The following tweet statement from Reebok comes courtesy of ESPN’s Darrel Rovell:

Reebok, who signed Jon Jones less than a month ago, is standing by him pic.twitter.com/uNkjXzaNyh

3. The UFC Has Already Issued a Statement in Support of Jones’ Decision to Enter Rehab

The UFC also issued a statement to Yahoo Sports on behalf of Jon Jones, which supports their Light Heavyweight Champion’s decision to properly tend to his drug problems:

We support UFC light heavyweight champion Jon Jones’ decision to enter a drug treatment facility to address his recent issue. While we are disappointed in the failed test, we applaud him for making this decision to enter a drug treatment facility. Jon is a strong, courageous fighter inside the Octagon, and we expect him to fight this issue with the same poise and diligence. We commend him on his decision, and look forward to him emerging from this program a better man as a result.

UFC President Dana White also made sure to offer up his support to Jones as well:

I am proud of Jon Jones for making the decision to enter a drug treatment facility. I’m confident that he’ll emerge from this program like the champion he truly is.

Jones was tested more than 12 hours before his UFC 182 bout with Daniel Cormier. According to the World Anti-Doping Agency’s code regarding drug testing, cocaine is banned by the organization but only through in-competition. Jones’ drug testing was considered out-of-competition, which allowed Jones to compete and keep his victory over Cormier. The WADA can only punish Jones for using drugs during the in-competition period.

Upon receiving Jones’ positive drug test results, the WADA decided to test him a 2nd time sometime around December 11th or the 12th in 2014. Jones actually ended up passing that test due to the cocaine metabolites moving out his system. It’s quite possible that Jones took teh cocaine during his training regimen period for his UFC 182 PPV fight.

I am aware of Jon’s test, and if there is anything to say it is this: there are a lot of people you impact, so please let’s get it together. Good luck on your rehab!

5. Jones Previously Ran Into Legal Trouble Back in May 2012

Back in May 2012, Jon Jones was arrested due to cops suspecting him of driving under the influence. This was brought on by the fact that Jones crashed his car right into a telephone pole while driving in New York. Jones pleaded guilty to a misdemeanor, was fined $1,000 and had his driver’s license suspended for six months. 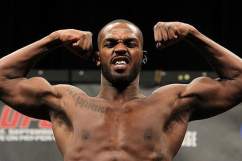